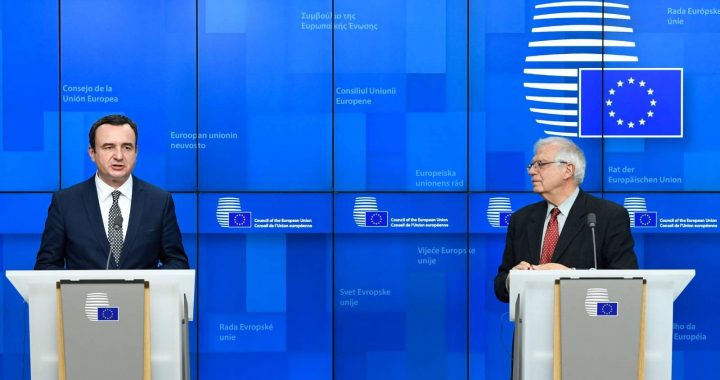 EU foreign affairs chief tells PM Kurti that the Constitutional Court ruling is no excuse for not moving ahead on the 2015 agreement to set up an Association of Serb-majority municipalities.

At a joint conference in Brussels on Tuesday, Kosovo Prime Minister Albin Kurti and the European Union’s High Representative for Foreign Affairs and Security Policy, Josep Borrell, clashed over Kosovo’s non-implementation of a 2015 agreement to establish an Association of Serb-majority municipalities.

Prime Minister Kurti said the agreement had not received the approval of the Constitutional Court of Kosovo.

“There are 33 agreements between Kosovo and Serbia, and two-thirds of them have not been implemented by Serbia, but official Belgrade always wants to mention an agreement that I must say has not passed the test of our Constitutional Court,” he said.

However, EU Foreign Affairs chief Borrel pressed Kurti to implement the agreement, saying the court ruling was not an obstacle.

“I am also a democrat and I am not here to serve any politician from any side. I do not agree when you say that the [Kosovo] Constitutional Court makes the implementation of this agreement impossible,” he said.

“It was reached by representatives of both parties, in good faith and in accordance with international norms for reaching an agreement and within the framework of [EU-facilitated] dialogue. I am sorry, Prime Minister, but I must ask for the implementation of this agreement,” Borrell added.

The Kosovo delegation, led by Kurti, stayed in Brussels for the fourth meeting of the Stabilization and Association Council, which took place on Tuesday.

The formation of an Association of Serb-majority municipalities in Kosovo is one of the most controversial agreements in the EU-facilitated Kosovo-Serbia dialogue.

It was agreed on by the parties in the process, but has never been implemented, after the Constitutional Court expressed reservations over some points.

The initial 2013 agreement provided that the Association would be established and operational by the end of that year. However, implementation was first stalled until the summer of 2015.

Then, in October 2015, the text of the agreement was sent for interpretation to the Constitutional Court of Kosovo. The court decision issued in December 2015 ruled that the Association Agreement’s 23 points were not in line with the Kosovo Constitution, especially the Agreement on the Principles for the Establishment of the Association.

Detailing the competencies given to the association’s 10 Serb-majority municipalities, it says they would have full “supervision” of the areas of rural and urban planning, economic development, education and health.

Serbia has repeatedly demanded that Kosovo implement this agreement.

The EU-led dialogue between Kosovo and Serbia started in 2011, and has continued with different intensities, but the parties are not close to a final agreement, with Serbian recognition of Kosovo’s independence  not even on the horizon.

In December 2015, BIRN and Internews Kosova published the “Big Deal” report, which analyzed and monitored implementation of agreements between Kosovo and Serbia arising from the dialogue process in Brussels.