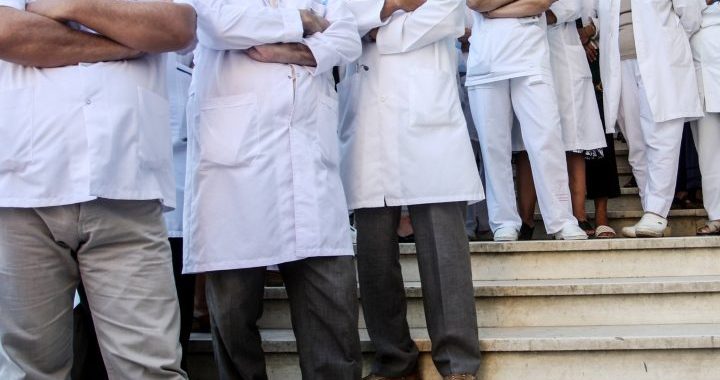 Senior health officials tell BIRN they are worried that the Kosovo health system may ‘collapse’ due to the demands on medical staff, with around 500 health workers estimated to have been infected with coronavirus so far.

On Tuesday morning, the Chamber of Kosovo Doctors announced that Fadil Zuka, a doctor from the town of Viti died after contracting COVID-19. He is the first doctor in Kosovo to die after testing positive for coronavirus since the outbreak began in March.

Zuka is one of around an estimated 140 doctors to have contracted coronavirus, while senior health officials have told BIRN that around 500 health workers have been infected. Kosovo’s National Institute for Public Health has recorded 6,045 cases across the country since testing began in February, with 2,675 cases still active.

Blerim Delija, the Vice President of the Federation of Health Trade Unions of Kosovo believes that the threat to health workers posed by COVID-19 could lead the country’s health system to collapse.

“The number of health workers infected has so far reached 480-500,” he tells BIRN. “I estimate that the huge disruption from the large number of patients with COVID-19 can lead to the collapse of the health system due to [the demand on] human resources.”

According to Delija, Kosovo’s health system already lacked qualified medical staff able to treat patients with COVID-19, and that number is reducing due to staff becoming infected with the coronavirus.

Despite these concerns, Bujar Gashi, the Director of Health at the Municipality of Prishtina, believes that the health system is still in a good position to deal with the coronavirus outbreak.

“Capacities in the primary health care centres are OK, and we have the possibility to meet the demands of the citizens,” Gashi tells BIRN.

However, Pleurat Sejdiu, the Head of the Chamber of Kosovo Doctors, says that the stress and risk of infection is leading to serious fatigue in the health workers on the front line of the fight against COVID-19, especially those working in intensive care units.

“The fatigue of the medical staff is no longer only physical but also mental, due to overwork,” he tells BIRN.

Sejdiu states that based on the information possessed by the Chamber, 140 doctors have been reported as being affected by COVID-19, a figure he describes as “alarming.” He adds that collecting information has been a tough process due to the atypical nature of the situation, but in recent weeks the information gathered has improved in accuracy.

“In the last week alone, 35 doctors have been reported as infected,” he adds.

On July 15, Minister of Health Armend Zemaj announced the hiring of 50 new doctors and 62 nurses to work in Kosovo’s hospitals. However, while Sejdiu is grateful for the support, which he believes can help relieve the burden on the overworked health staff, he tells BIRN that more specialised reinforcement is required.

“Our health system needs more epidemiologists, who would be on the front line, not only for diagnoses but also to give initial treatment,” he explains.

With the dramatic increase in coronavirus cases in recent weeks, wards in hospitals across the country have been utilised to treat patients with COVID-19 after the Infectious Disease Clinic in Prishtina reached capacity.

However, Bahri Thaci, who works at the Pulmonary Clinic at the University Clinical Centre of Kosovo, tells BIRN that these makeshift wards do not reach the standards required to contain the spread of infection.

“Several nurses and doctors have been infected in our clinic, but all of us who work there are at risk of becoming infected,” he says. “Despite all the measures taken, in reality these clinics that we have improvised do not meet the conditions and standards that these clinics should reach.”

Thaci paints an alarming picture of the reality within these wards. “All patients use one toilet and everyone uses the same corridor – this should not have happened,” he says. “But this has been imposed on us, the health staff. By sacrificing ourselves, we are trying to protect patients and their health.”

According to the pulmonologist, due to the increasing number of patients suffering from COVID-19, medical staff are often forced to release patients prematurely, in order to create space for patients in a more serious condition.

However, despite the difficult situation, Thaci welcomes the recruitment of further doctors and nurses by the Ministry of Health which he hopes will alleviate the situation, and adds that people’s fate is in their own hands.

“After the increase in deaths from COVID-19, everyone is aware [of the situation],” he tells BIRN. “If everyone continues to wear masks, I believe that the number of people infected with the virus can be reduced.”