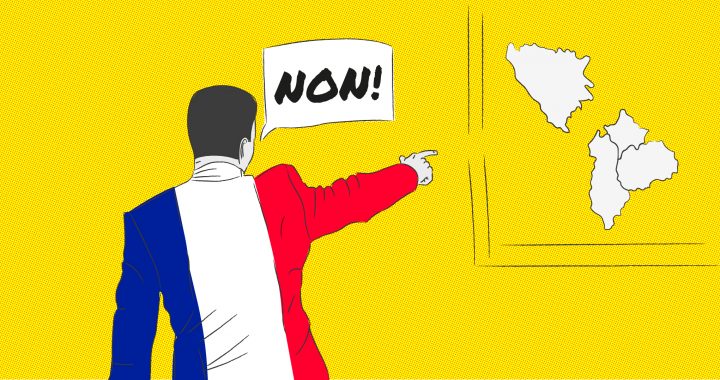 The French veto on EU accession talks with North Macedonia and Albania ends a chapter in the EU’s long and tortured relationship with the Western Balkans, leaving the region in limbo and weakening the Union’s role in the Kosovo-Serbia dialogue.

At first glance, EU enlargement in the Balkans might not appear dead.

After all, it was only France that vehemently opposed the beginning of accession talks with Albania and North Macedonia, whereas all other member states favored opening talks with North Macedonia at least, and were even willing to attempt to convince French President Emmanuel Macron to do likewise.

France’s isolation in their opposition became apparent when public criticism for the decision came not only from the outgoing and incoming presidents of the European Commission, EC, but also from prime ministers and other high government officials from across the EU.

Additionally, French concerns had nothing to do with the countries themselves, so if Macron’s requests for reform in the EU and the enlargement method are addressed, France might lift its blockade.

In the meantime, accession talks with Montenegro and Serbia continue, while other tools of engagement with North Macedonia, Albania, Kosovo and Bosnia and Herzegovina continue to be available.

In brief, much can continue irrespective of the blockade last week. After all, it is not the first time that France has objected to accession talks. It famously said ‘non’ twice to the UK and also held out against Spanish EU membership, while Macron has already twice previously delayed the opening of accession talks with Albania and North Macedonia.

Yet, this time feels different. Not only did the Macedonian government of Zoran Zaev swiftly resign after the EU non-decision, the decision has put a dampener on the hopes of many in the Western Balkans to join the Union.

Since the end of the Kosovo war in 1999, EU engagement in the region has been predicated on the prospect of EU membership. The EU can no longer make this offer in a plausible manner or within a reasonable timeframe. The repercussions are significant beyond North Macedonia and Albania.

Take the dialogue between Serbia and Kosovo. The Brussels dialogue was initiated by the EU in 2011 and rested on the offer that improvement of relations and eventual normalization between the two would clear the path to the EU.

But as the government of North Macedonia have painfully discovered, taking a difficult and unpopular plunge into settling a decade old dispute, offers no rewards from the EU.

Leaders in Serbia and Kosovo have already taken note. Serbia in particular has little to gain from improving relations with Kosovo if there is no larger reward on offer – and this reward has just become implausible.

Throughout the Western Balkans, the unpredictability of EU membership actively discourages leaders from taking risks and engaging in bold reforms. Instead, autocratic and kleptocratic leaders will see themselves reaffirmed for not trying too hard to join the club.

The Western Balkans will not, as some fear, fall into Russian, Turkish or Chinese hands. Instead it will become a new Casablanca, a place where people are passing through, trying to leave, but remaining stuck – a place where different powers vie for influence and where money and power trumps norms and values.

Insincere objections and a loss of credibility

In justifying his decision not to open accession talks, Macron focused on the need for the EU to reform, as well as to create a new mechanism for enlargement. These concerns are in part serious, but in part disingenuous.

The EU legitimately needs reform to remain functional with potentially 33 member states, and the enlargement process indeed could be improved, the EC itself suggested as much in its 2018 strategy.

However, Macron still comes across as insincere. France under his presidency has made no attempt to improve the enlargement process, or even given suggestions as to how it could be. It had never even raised the issue until just under a week ago.

On the issue of EU reform, the notion that reforms are needed prior to opening accession talks, rather than before the new members actually join the Union is also unconvincing.

After all, Montenegro began accession talks seven years ago and is not yet close to membership. Even if North Macedonia and Albania began talks this year, they would not join for another decade even if no serious obstacles emerged.

This leaves plenty of time for the EU to reform. If the envisioned reforms were not complete, France or other members would have numerous opportunities to slow down, or even stop accession talks in the years to come.

It is therefore unclear whether the demands of Macron can be easily addressed. Moreover, the willingness of one member state to stop the enlargement process is likely to be emulated by others. Even if France were to yield, there are plenty of other members which are willing to block any further steps.

Earlier vetoes were often based on narrow bilateral disputes, such as the Greek veto towards North Macedonia, but now member states have begun doubting the EC’s assessment of the countries’ readiness, fundamentally undermining its credibility.

The EC therefore no longer has the ability to offer any promise toward the Western Balkans. The notion that reforms and implementation of EU rules would lead to progress toward EU membership based on the assessment of the EC is dead, and with it conditionality.

EU conditionality, a core mechanism at the core of enlargement for more than 20 years has thus come to an end. With it, EU foreign policy towards the Western Balkans has been seriously undermined. The promise of enlargement is hollow at best, and, in a worst-case scenario, lost entirely.

Florian Bieber is Professor for Southeast European History and Politics at the University of Graz and coordinator of the Balkans in Europe Policy Advisory Group. He just published The Rise of Authoritarianism in the Western Balkans (Palgrave, 2020).