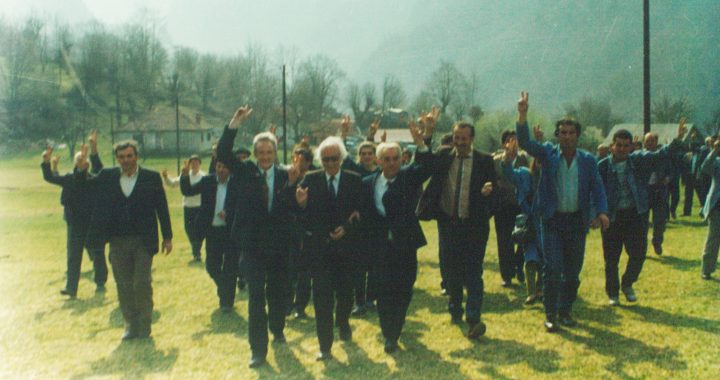 A multimedia exhibition chronicling the ‘90s blood feud reconciliation campaign in Kosovo is set to open tonight in Peja.

A multimedia exhibition chronicling “The Reconciliation of Blood Feuds Campaign 1990-1991” will open at the Gallery of Arts in Peja on Wednesday.

The exhibition, covering a historical campaign to reconcile blood feuds amongst Albanian families in the early ‘90s, includes photographs, video and audio interviews.

The event was organized by the Kosovo Oral History Initiative, which exhibits the stories of people who organized and took part in the campaign initiated by two students and former political prisoners from Peja, Hava Shala and Myrvete Dreshaj. The campaign, which was led by the Peja students, Kosovar intelligentsia and an interfaith coalition of clerics, drew large support and mediated around 1,000 cases of families ‘forgiving the blood.’

The organization chose Peja for the exhibition because, as director of the Oral History initiative for Kosovo Eremire Krasniqi explained, the city and its surroundings were the starting point of the campaign.

After Kosovo’s autonomy was suspended in 1989, a series of protests erupted throughout the country. This continued well into the early 1990s when Kosovo Albanians faced massive dismissals from the public sector, and the education system in the Albanian language was largely restricted, with higher education being banned.

In January 1990, 33 Albanian students were killed during a protest in Peja, while the media and the Serbian government claimed that blood feuds, and not the police, were to be blamed for their deaths.

“All the people who were killed during these protests [in Peja] were represented as murders between Albanians as a result of blood feuds,” explained Krasniqi.

“After all these students were killed, [activists] realized that people have to reconcile so that they can protest ‘comfortably.’ Namely, this was in order to not be afraid that in the future people would say they were killed because of blood feuds, and that their families would believe the story, which would result in more and more killings,” she added.

The campaign, which lasted from February 1990 to  May 17, 1992, encompassed blood feuds in Kosovo and beyond.

“It was an all-national initiative, even in Detroit and New York Albanian families reconciled their blood feuds,” Krasniqi explained, adding that the campaign also branched out in the other Yugoslav republics where Albanians lived.

The exhibition includes handpicked oral history interviews conducted by the Oral History Initiative since 2015. Researchers conducted 25 interviews with the campaign’s leaders, including mediators, clerics, academics, activists. Only four of these video interviews will be on show, but more interviews can be heard in the exhibition’s audio station.

Additionally, the exhibition will include 200 photographs and a timeline with all the documented meetings from the campaign.

One of the interviews, on show in Peja, recounts the story of a member of the Shpresa organization, which reconciled families in New York.

The exhibition also includes an interview with Hava Shala, one of the founders of the initiative.

Yet another video shows an interview with Pajtim Osmanaj, an artist based in New York who is one of the many Kosovar children named after the reconciliation initiative, which in Albanian is called Pajtimi i Gjaqeve.

According to Krasniqi, this exhibition also provides an alternative narrative to the more “patriotic tone” of Kosovo’s recent historiography.

“Young people especially have a hard time talking about the past, and create a more direct relation to these figures of recent history without a patriotic tone… And in this exhibition, you can find a more contemporary way to talk about them without the hardened narrative of the ’90s,” she said.