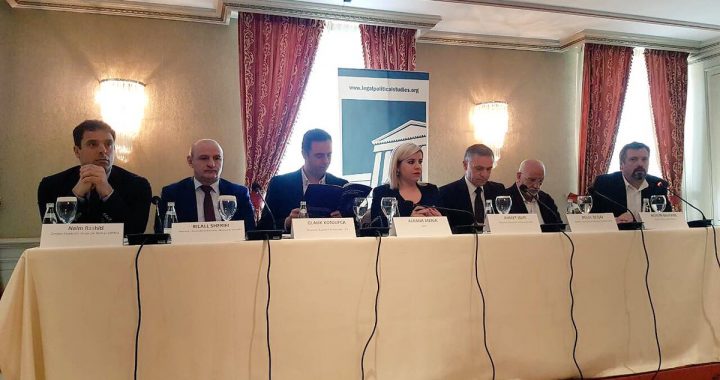 The need for a common strategic plan for dialogue with Serbia related to Kosovo’s vision for EU integration was discussed at a roundtable with Kosovo Assembly members today, 24 April.

Debate on the future of relations with Serbia and hopes for a ‘legally binding’ agreement between the two countries was at the core of the roundtable discussion hosted by Albana Merja of the Group for Legal and Political Studies, GLPS, at the Swiss Diamond Hotel in Prishtina on Tuesday.

GLPS presented their recently published policy analysis titled “In Search of Consensus: Kosovo-Serbia Dialogue in the EU Enlargement Framework”, followed by discussion from a group of panelists including the report’s author, Agron Bajrami, editor-in-chief of the daily newspaper  Koha Ditore.

“Rather than pushing the dialogue ahead, this analysis recommends that Kosovo should have an internal consensus and a consensual platform between political parties and institutions on the dialogue,” said Bajrami, explaining that the evident tensions remaining between Serbia and Kosovo reflect a lack of readiness to move forward with the discussion on both sides.

The panel also hosted Kosovo Assembly members Glauk Konjufca  from Vetevendosje Ahmet Isufi from the Alliance for the Future of Kosovo AAK and Bilall Sherifi from the Social Democratic Initiative, Nisma, as well as  political analyst Belul Beqaj and executive director of the Balkans Group, Naim Rashiti, who discussed what consensus on the dialogue should look like, in order to ensure Kosovo is not left behind in the EU accession process.

“In order to move forward with the dialogue and protect Kosovo’s interests, we and Serbia need to correct our mistakes and fulfil the conditions foreseen in the strategy,” said Isufi, a member of the governing party AAK. “Considering good neighbourliness, we as government should always be looking to be accountable for finalizing these agreements.”

However, Konjufca of opposition Vetevendosje explained that his party would not support any consensus when it “concerns only the fulfilment of one political stance,” citing weak political and institutional representation as the reason for failure of the negotiations so far.

The European Commission released its report on Kosovo’s EU integration path last week, emphasizing that further progress needs to be made towards normalization of relations with Serbia, ideally through a legally binding agreement, before EU accession is likely to become a reality.

In their previous report on the dialogue, GLPS noted the readiness of Serbian President Aleksander Vucic, who is leading the dialogue from Belgrade, to move forward with the dialogue through ‘creative solutions’ that would result in a ‘historic agreement’ between the two nations.

Speaker of the Kosovo Assembly, Kadri Veseli, called for all political parties to work towards a consensual platform on the issue of dialogue with Serbia, stating in an open letter on Monday that the President should lead negotiations, in cooperation with the government, towards a legally binding agreement.

The report also recommends that any consensual platform built concerning the dialogue should reflect Kosovo’s goals moving towards the EU integration process. According to  Bajrami, Kosovo’s strategy for the dialogue should acknowledge the positions of the five EU states that do not recognize Kosovo and their role in shaping Kosovo’s future.

“Kosovo is not a main stakeholder and does not determine the parameters of this process, meaning there will be tension,” explained Rashiti.

“The important thing is for our country to organize itself in a way that creates guidelines on how it will manage the process of the dialogue politically and institutionally.”