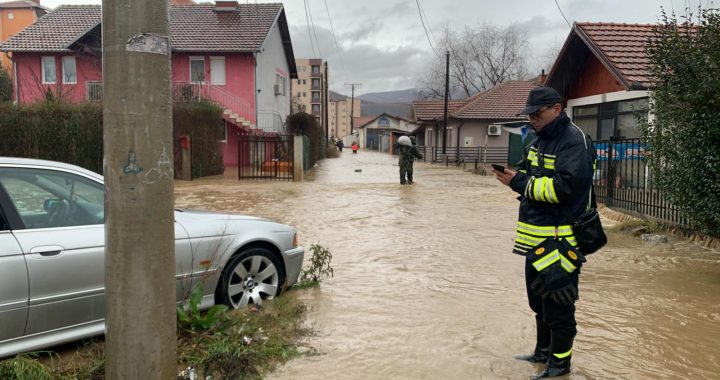 Heavy rains these last days have caused flooding across Kosovo. As a result, many cities also face reductions in the drinking water supply.

Western and northern regions of Kosovo are dealing with severe floods in towns and cities including Mitrovica, Vushtrria, Peja, Skenderaj and Decan.

The Hydrometeorological Institute of Kosovo announced that heavy rains in the last few days had caused some rivers to flood, causing traffic problems, landslides, but also damage to agricultural land.

“As a result of the rain during the last few days, especially in the western, northwestern and northern parts of Kosovo, some rivers have presented rapid floods, which may have caused difficulties and problems, such as landslides, blockage of sewers and traffic difficulties, but also flooding of agricultural lands,” the announcement stated.

The intensity of rainfall has also caused problems for water treatment facilities. As a result, many cities face shortages and reductions in their drinking water supply.

The Prishtina Regional Water Authority has notified that some parts of Prishtina, Fushe Kosova, Obilic and Drenas will face a lack of drinking water due to the overflow of the Iber-Lepenci canal, making water sanitation impossible.

The mayor of Skenderaj, Fadil Nura, announced that as a result of the continuous rains, the situation in his municipality had worsened.

Nura said he had decided to declare a state of emergency in the entire territory of the municipality.

Meanwhile, in Mitrovica, the river Iber has partially overflowed its bed as a result of the rain. Arian Tahiri, deputy mayor of the municipality, said the situation was very serious.

“Since midnight, there has been continuous rain of very high intensity. Along the bed of the river Iber, including the part near the artificial lake, the water has partially come out of the bed and there is a risk that it will overflow even more. The village of Koshtova is also in danger, “ Tahiri said.

The Ministry of Defence has declared that based on the National Emergency Response Plan, it is fully prepared to respond, depending on the requirements of the Emergency Management Agency.

The Hydrometeorological Institute emphasized that the same weather situation is expected to continue in the coming days, so the levels and flows of rivers are expected to rise further, and cause more floods.

It is estimated that damage to the river beds is a result of the illegal extraction of gravel, contributing a lot to the flooding of the areas.