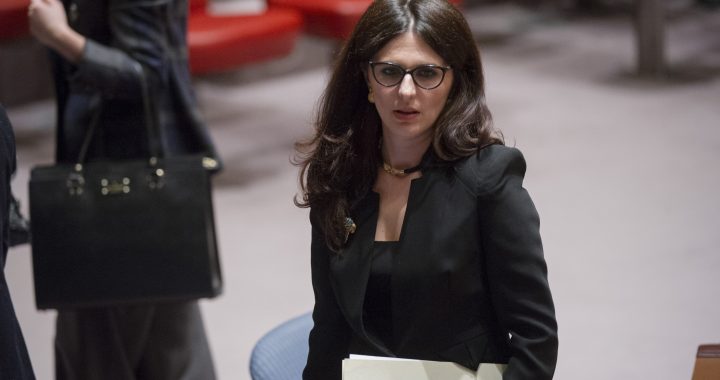 Kosovo Ambassador to the US Vlora Citaku leaving a UN meeting in 2016.

Kosovo’s Minister for Foreign Affairs Glauk Konjufca announced on Tuesday afternoon that he has proposed the dismissal of seven heads of Kosovo’s diplomatic missions.

Those proposed to be recalled are Kosovo’s Ambassador to the United States, Vlora Citaku, the General Consul in Bern, Switzerland, Ramadan Avdiu, the General Consul in Strasbourg, France, Mimoza Ahmetaj, and Kosovo’s Ambassadors to the Netherlands, Hungary, Bulgaria and Montenegro: Lirim Grejcevci, Shpend Kallaba, Edon Cana and Ylber Hysa respectively.

“From the beginning of my mandate, I have pledged to establish law and order in the Ministry of Foreign Affairs and Diaspora,” said Konjufca in a Facebook post on Tuesday. “One of the next steps is the request for the return of political ambassadors who have completed the four year mandate foreseen under the laws in force in the Republic of Kosovo.”

Following a proposal from the government, the Kosovo Constitution requires approval from Kosovo President Hashim Thaci before the appointment or dismissal of the heads of diplomatic missions of Kosovo can be confirmed. The Office of the President informed newspaper Telegrafi that no proposal has been formally received, but that it shall be considered once such a proposal has been made.

Citaku, who has been the Kosovo Ambassador the US since August 2015, was at the center of a media storm earlier this year after President Thaci announced that the US Ambassador informed him that Jamaica’s had recognised Kosovo’s independence. Jamaica’s foreign affairs minister denied the reports in a tweet the same day.

Citaku responded on Facebook later on Tuesday afternoon, saying that she would accept the government’s decision, noting that as her appointment was a political choice rather than a promotion through the Kosovo Civil Service, it is “natural” for the new government to seek her replacement.

“In this transitional period I will try to fulfill all my duties with responsibility, as I have always done,” she said. “I hope that the institutions of the Republic of Kosovo agree quickly on my successor.”

However, the ambassador condemned Konjufca for informing her of the proposal for dismissal via email at the same time the news was published on Facebook, and without preliminary consultation. “I am satisfied with the already well-known fact that I am unwanted,” she said. “However, I will not let myself become cannon fodder in the battle between the Government and the Presidency.”

The proposals to dismiss the heads of mission follows Konjufca’s decision to annul the appointments of 14 consuls in various Kosovo embassies on 20 February, reversing what he described as ‘unlawful’ recruitments made by the previous Kosovo Government.

This article was amended at 16:56 on 3/3/20 to include the response of Ambassador Vlora Citaku.