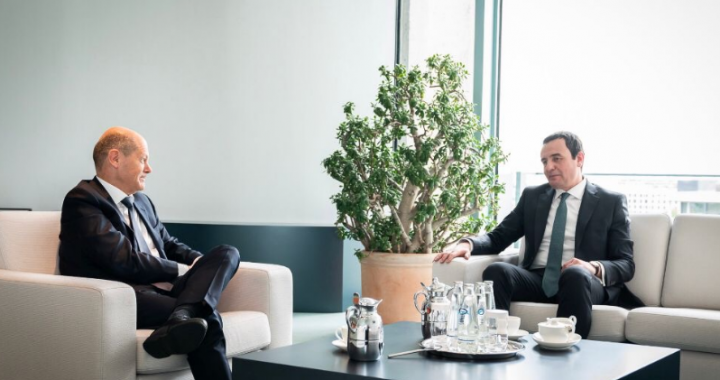 The stalled dialogue between the two, the war in Ukraine and the road towards European Union membership were some of the topics Scholz discussed with the leaders of the two Balkan countries.

After the meeting with Kurti, Scholz said progress needs to be made in visa liberalization for Kosovars.

“Further progress must be made in visa liberalization for Kosovo; the federal government has emphasized this as an objective in the [German] coalition agreement, for which I am committed to the European Union in talks with partners,” the Chancellor said.

After the meeting with  the German leader, Kurti insisted Kosovo was proactive in the EU-facilitated dialogue process with Serbia.

“Kosovo is proactive and constructive. We want a final agreement [with Serbia], which has mutual recognition not at the bottom of it but at the centre. We are committed to move fast and achieve concrete results and to cooperate more,” Kurti said.

Kurti also stated that Kosovo will soon submit an application for membership to the Council of Europe, as well as NATO’s Partnership for Peace programme, PfP, the first step to membership.

Meanwhile, after meeting Serbian President Vucic, Scholz said that both sides must adhere to their obligations in the dialogue process.

“The process of normalizing relations is important for stabilization, we must resolve all open pressures, courage is needed and both sides must adhere to their obligations,” Scholz said.

He added that he discussed sanctions against Russia [over Ukraine] and the situation in Bosnia with Vucic.

Vucic said Belgrade would do its best to find a compromise solution to the Kosovo issue.

After the meetings with Scholz, Kurti and Vucic had an informal dinner with the European Union’s envoy for the Kosovo-Serbia dialogue, Mirolsav Lajcak.

Before this, Kurti and Vucic met for the first time on June 15, 2021 in Brussels, in the framework of the dialogue, and then on July 7 of the same year.

The latest meeting between the two leaders in Berlin comes after the two governments failed to reach an agreement on the issue of vehicle license plates in Brussels in April.

Since then, the European Union has said that until a proper agreement is reached between Kosovo and Serbia on the issue, the regime of temporary sticky papers on vehicle license plates will continue.

The EU-led dialogue between Kosovo and Serbia started in 2011, and has continued with different intensities, but the parties are not close to a final agreement.

However, international pressure has increased on Kosovo and Serbia to reach an agreement since Russia invaded Ukraine on February 24.