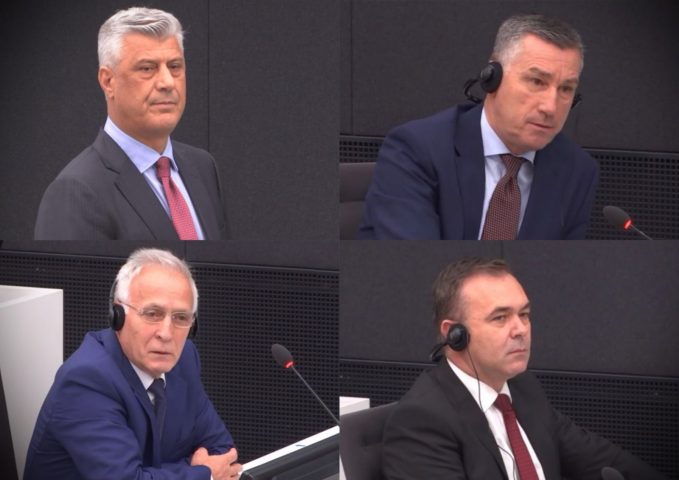 The Specialist Prosecutor's Office in The Hague on May 2 filed fresh indictments for war crimes, torture, unlawful murders and political arrests against four KLA leaders held in The Hague.

The Specialist Prosecution in the Hague has filed new charges against the four detained former KLA leaders, Hashim Thaçi, Kadri Veseli, Rexhep Selimi and Jakup Krasniqi, allegedly committed in the dormitories of Gjilan/Gnjilane, in Budakove and Semetishte in 1998 and 1999.

The Specialist Prosecutor’s Office claims they detained 12 people and sent them to Budakove in 1998 and 1999. The 12 are described as Serbs, collaborators with Serbs or as supporters of the Democratic League of Kosovo, LDK. Albanians were among those detained.

According to the prosecution, the two detained Albanians were taken to a basement in Budakove, tied up and beaten, being considered traitors to Kosovo. The prosecution said one of the two detainees, a young man, was tortured with boiling water that  left him unable to walk.

The indictment says ten of the 12 detainees were either released or escaped, while two died. One was allegedly last seen in KLA detention.

Two KLA soldiers are claimed to have beaten a detainee and broken his teeth with a Kalashnikov rifle. He is described as having been beaten to death.

Similar crimes are described as having occurred in the Gjilan Dormitory.

Related to these cases, the four KLA leaders are charged with murder, torture and ill-treatment on the basis of command responsibility.

Thaçi, Veseli, Selimi and Krasniqi are still in detention, as the pre-trial judge considered that there was a risk that they would flee justice or hinder the normal conduct of criminal proceedings.

They were arrested in November of 2020 on war crimes charges after the indictment against them was confirmed. All the charges have been dismissed by the four KLA leaders.

According to the specialist prosecution, from March 1998 to September 1999, Thaçi, Selimi, Krasniqi and Veseli committed war crimes and crimes against humanity by arresting and detaining civilians illegally, treating them cruelly, torturing them and having them disappeared.