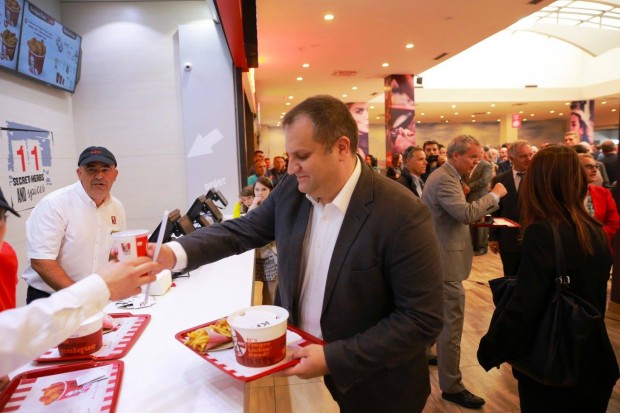 The first western fast food franchise opens in Albi Center, providing Kosovo with sizzling deep-fried chicken, disappointing fries and not much else.

Kosovo just welcomed its first KFC franchise — the first Western fast food outlet of any kind in the country. Its opening was attended by the US ambassador and Prishtina’s mayor, both of whom looked super-excited to get their hands on some finger-lickin’ deep-fried chicken.

And after eight years of independence, the arrival of KFC is at least a sign of Kosovo becoming more connected to the outside world — even if there is no sign yet of the ultimate symbol of globalised fast food, Mickey D’s. How to mark such a momentous development? By going along to do a serious review of the fare on offer, of course. We sent a team with international and local KFC expertise: an American, a Scot, and a Kosovar.

First let’s get a little background: KFC originally stood for Kentucky Fried Chicken and was founded in that US state as the brainchild of Colonel Harland Sanders, who became its global symbol. Fried chicken began as part of Southern US cuisine, perfected and sold by black women, often at train depots to travellers. Fried chicken was also most commonly served up on Sundays after church for families as a main dish. The dish is made by marinating the chicken overnight in buttermilk or salt and then dipping it into a spiced flour mix (every family has a slightly different recipe), then deep-frying it. Colonel Sanders sold his chicken using a secret blend of 11 herbs and spices (which may have recently been revealed). From these origins fried chicken evolved into one of the most popular fast food dishes throughout the world.

The Kosovo KFC resembles a more British-style “chicken and chips” snack joint, whereas in the US, KFC is geared toward being more of a cooking substitute (late from work? No time to cook? Bring home KFC). US KFCs have side dishes: mashed potato and gravy, coleslaw, biscuits (a bread roll made with buttermilk), and other typical chicken dinner accompaniments. Every American will admit — even if only under duress and perhaps with a signed non-disclosure agreement in tow — to their favorite side dish. Even in the UK you have more options than in this new Kosovo joint. But after testing out this market, perhaps they’ll bring in more dishes. That would boost the main product. Fried chicken with fries is a lonely experience. It needs friends.

It should be noted here that in addition to the chicken, the menu extends to sandwiches and wraps, a salad, an ice cream dessert, and sweet corn. But it ends there.

The original-recipe chicken (six euros for a bucket of six pieces to share; eight euros will buy you an extra two drinks and two fries) was the perfect embodiment of classic KFC. Freshly cooked and piping hot, it had that perfect mixture of salty, peppery, and umami tastes. The original recipe sold here is not especially crispy, but it’s not supposed to be. It’s about that comforting taste and hot juicy chicken — even the white meat stays moist. All of us felt that was achieved.

We also topped it off with a side of Hot Wings (2.50 euros for six pieces). These were wings with a bit more spice and loads more flour to create a thicker crust and give the extra crunch. Col. Sanders reportedly claimed that he hated the extra crispy chicken that KFC devised after he sold the company, describing it as a “damn fried dough ball with some chicken.” But then again, Col. Sanders once shot a man — he might not be the best judge of character.

In the view of this expert panel, extra crispy works. The Hot Wings were messy, crispy, and full of spice and would really be enjoyable with a beer and some sauces on the side. Barbecue sauce, mayonnaise, or hot mustard would perfect this dish. But in this small joint in the middle of the Albi mall food court, only served our chicken with super-sweet ketchup and mayo are available.

The wilted thin-cut fries (70 cents per serving) were a complete disappointment. Both texture and taste were closer to a well-made, durable shoelace than a French fry. Another reason for KFC Kosova to add more side dishes. And they need to be better than the fries you have now.

A side-note: the fountain drinks had no diet options. If you buy a Coke Zero separately you’ll end up paying more. This brings up us to the question: how good is KFC for you? Short answer: not very. But you don’t come to KFC to be healthy. You come to KFC to have fun food. It is obviously not an everyday meal, but it is best to have with friends after going bowling, playing football, shopping or just sitting in front of the television binging away in both meanings of the term.

Then get up the next day and go for a run.