A day in Prishtina 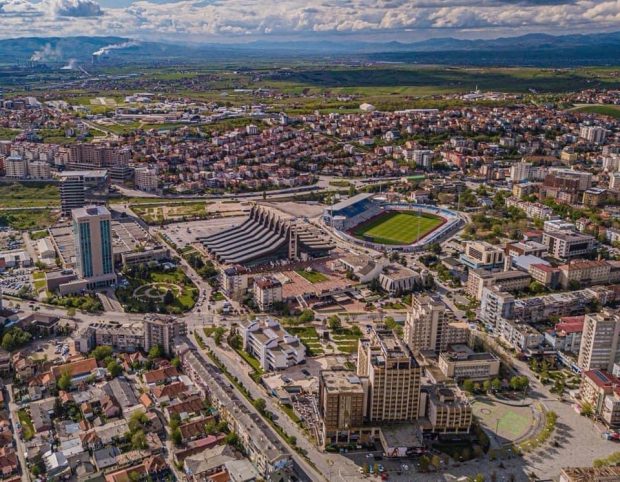 You might have read that Yahoo article about how the best macchiatos in the word are made in Prishtina. But the city has more than that. A visitor spending a day in the newest capital of Europe should take in a macchiato before walking around some of the interesting places, old cultural objects and bars – without which Prishtina would be known only for good macchiato and nothing else.

Start the day at 7 in the morning with a famous Prishtina macchiato in a simple neighborhood cafe, have another one in the centre, and end it with a drink according to the tastes of the evening. But coffee is drunk only when you have to visit some of the places, monuments, bars that must be seen. Besides that, “where, what, how and why Prishtina?

What to see in Prishtina?

Prishtina looks bigger from above than it does as we walk through its streets. Before seeing other places that must be visited, it is interesting first to climb to the top of the Catholic Cathedral of St Mother Teresa in the heart of Prishtina. Climbing up can be as scary as it is adrenaline-filled. From one of the highest points in the capital, you can see every corner that you can visit later. After that, there is a lot to see inside the cathedral, from the Ernest Koliqi Library, where you can sit and read books, to the central part of the cathedral, where the large windows are covered with stained glass. The cathedral is dedicated to the famous Albanian nun and missionary, Saint Teresa of Calcutta.

From the cathedral, it is not even five minutes to the National Library of Kosovo. The villa is located on the Campus of the University of Prishtina. It is said to have a gloomy appearance, but it definitely has unique architecture. This monument of cultural heritage may look like a prison from the outside, but it symbolizes knowledge with its domes wrapped in a steel skeletal membrane, and with 99 separate domes that resemble a brain. In addition to being special for its unusual architecture, cultural events, such as exhibitions, book promotions and various debates, are organized almost every day in the library. As mysterious as the exterior, the interior is dominated by interesting cream-and-coffee-coloured tiles.

Not far from the library is  the symbol of Prishtina, the NEWBORN monument. Somewhere around 10 minutes walk, the symbol of Kosovo’s statehood is located in front of the Palace of Youth and Sports. We cannot see this monument for more than two years in a row with the same design. Apart from its uniqueness as a symbol of the independence of Kosovo, the interesting thing lies in the design, which always has a new message to convey, a new thing to learn or something to express. NEWBORN, realized within 10 days in 2008 and inaugurated on February 17, symbolizes the new birth of Kosovo, gaining freedom and becoming the newest state in the world. This year, NEWBORN should be visited anyway by all citizens of Kosovo and international guests because it carries a strong gender-related message, “Winged Women.“

As soon as you turn your head towards NEWBORN, you cannot return without visiting the Palace of Youth and Sports, now the first shopping centre in Prishtina, built in the late-1970s, or as we call it, Buro Ramiz, in which, among other things, good pictures can be made. In this building is the most famous pasticceria of Prishtina, Elida, which you must visit. You must also try a slice of the desserts. Elida was the epicenter for the intellectuals of the 1980s and remains an inseparable part of the cultural life of Prishtina.

Without leaving the road, walking in a straight diagonal for about seven minutes, you will arrive at the Ideal Prison, or Museum of Prishtina. The former Prison of Prishtina was built in the Yugoslav communist era in 1951, and was where political prisoners from Kosovo were mistreated. This year it was transformed into a museum and is the newest site that should be visited by anyone who comes to the capital. There you can hear, see and feel what the resistance endured and sacrificed to preserve the idea of the country’s freedom. The cramped rooms of the prison seem to speak for themselves and tell of the suffering of the prisoners who were treated there, inhumanely.

After this museum, the road to another museum begins, the Ethnological Museum of Kosovo. A little further than the other locations, to get here you have to hop on a bus, no. 4. This museum is located in the Emin Gjiku Complex, which is where heritage from the Ottoman period in Kosovo are exhibited. This place dates from the 18th century. The whole place is covered with antiquity that may make you want to go back and live in a time when the world was different. You can see clothes, weapons, old food and tools from a completely different way of life. This whole area is worth a visit because it is the old part of Prishtina, where you can also find the Clock Tower (Sahatkulla), the Great Hammam of Prishtina and the Fatih Mosque or King’s Mosque. This is the largest mosque in Prishtina and is in the middle of the capital.

Besides these cultural objects, for some richer air at the end of the day, without doubt you should visit Gërmia Park, which is in the suburbs. It is not far on foot, by bicycle or bus. This park is the largest in Prishtina and is under institutional protection.

Meanwhile, for nightlife, try the National Theater of Kosovo, which regularly has shows from its repertoire after 8pm, or you can go to one of the nightclubs, which are numerous.

Start with the Grand Hotel, on which several stars are placed and where it is written on the top, “When the sun goes away, we will paint the sky”, done by the Kosovar artist, Petrit Halilaj. The hotel in the heart of Prishtina, built from 1974 to 1978, should also not be missed. Through the corridors and old rooms you can see existential stories formed through art, related to the concerns of people in Kosovo, and the exhibition ‘The Grand Scheme of Things’,

Another object that should be visited and has returned to Prishtina after many years as a Center for Educational Practice of the Manifesta is the former Hivzi Sylejmani Library in Tophane. The entire space is covered with colourful works done by children, while in the drawers, where the children’s books are, in an environment that preserves the ancient identity of the former library, new works are also to be found.

In the Hamam of Prishtina, otherwise known as Han Hamam of Fatih Sultan Mehmet, an interesting installation in red has been realized, work of the Japanese artist Chiharu Shiota, which expresses personal stories of people in Kosovo woven into a network that symbolizes their existence in memory. This object is one of the most important cultural and heritage spaces in the capital. It was a public bath during the Ottoman period.

In the National Gallery of Kosovo, Ukrainian artist Alevtina Kakhidze has created art using plants. On the walls of the gallery, visitors can see several picture frames that contain plants in the form of a herbarium. These plants are placed in this way as a sign of peace in the world.

How to travel to and within Prishtina?

The road to Prishtina is shorter than to the capitals of the other states of the region, and besides cars, is most often done by bus. The nearest capital is Skopje, or Shkup in Albanian, from where you can reach Prishtina in just over an hour by bus.  The road from Tirana requires a longer playlist to listen to; the journey takes four hours. Every day, 10 buses travel from Tirana to Prishtina. From Belgrade, via Novi Pazar, it takes about eight hours by bus.

Prishtina is not so big enough that you need a car or bus to see it. Most of the interesting things are not far from each other. With a coffee in hand, you can move around. For bike lovers, there are some cycling paths in Prishtina through which they can go from one place to another. Recently, the trend of electric scooters has spread to Prishtina, with which you can move even more easily than by bicycles. Many use pedestrian sidewalks, unfortunately.  The fewer cars the better, so no taxis, no private cars. Prishtina is congested with traffic, so one less motor vehicle means more air for citizens. But the yellow public buses cannot be avoided. They go very frequently and it is often much better to travel by bus which costs 40 cents a ride.

Where and what to eat and drink?

A small family garden and a narrow bohemian space is located near the Student Canteen. The bar here, called P, is a place where you can enjoy nature and drink herbal teas. For crepes, pancakes and American waffles combined with Turkish dishes with baked potatoes, try Tomy’s waffle, a small cafe located behind the Cathedral of St Mother Teresa. In addition to the new foods that have come to Kosovo lately, anyone who comes to Prishtina should try some of the delicious traditional foods in the restaurant Liburnia located in Meto Bajraktari street, which has a fascinating old environment and food prepared in a traditional way.