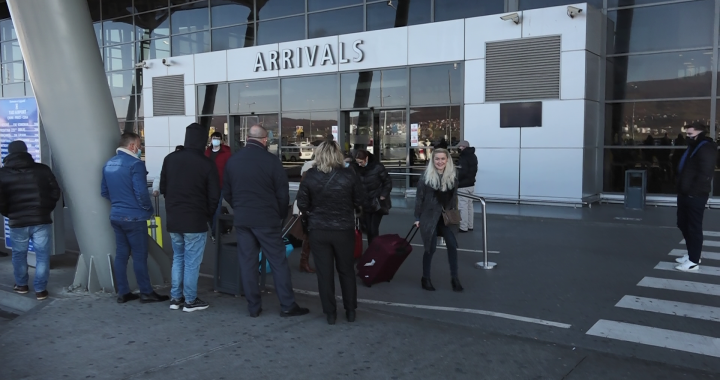 BIRN visited Prishtina International Airport on Friday, where hundreds of members of the Kosovo diaspora were arriving in order to cast their vote in Sunday’s election.

Members of the Kosovo diaspora flooded the arrivals terminal at Prishtina International Airport on Friday, with many returning in order to cast their vote in Sunday’s parliamentary elections.

According to Valentina Gara, a spokesperson for the airport, this weekend has 10 more incoming flights scheduled than last weekend, with large numbers of emigrants expected to return before the election.

One returnee was Faton Karalia, who had not been in Kosovo since 2019. He told BIRN that voting on Sunday was another reason to book the flight back home.

“Of course I came to vote, but I also came for independence [day], for a vacation, and to visit my family,” Karalia said. “We want changes – we hope it will become better in Kosovo. We don’t want to continue like this anymore. A total change is needed.”

The desire for change was consistently cited as motivation for flying back to vote among the people that BIRN spoke to, including for Skender Hoxha from Basel in Switzerland. It is the first time Hoxha has flown back to vote in person, and he told BIRN that he booked the flight in the hopes of bringing change to the country.

“We want to vote for a country with justice and dignity for teachers and doctors. Everyone who works should have dignity!” he said. “We are tired after these past two decades. It’s time for things to change.”

Xhafer Shkodra, who is in his 50s, also flew in from Switzerland, where there is a large Kosovo Albanian diaspora. “I wasn’t on the voting list and couldn’t vote via post,” he told BIRN. “The only reason I am here is to vote.”

Shkodra will only stay in Kosovo for a week before returning to Switzerland, and believes that this election is the last opportunity for Kosovo to change course. “It’s either this time or we will never change,” he said. “It’s our last chance!”

Fatime Shorolli from Podujeva also returned to Kosovo along with her husband Fetah, with voting on Sunday the couple’s primary reason for travelling.

“Our children voted via the post office but my husband and I wanted to vote directly,” Shorolli said. Her husband added that the couple returned home in order to vote for change. “It’s enough!” he said. “Twenty years without results or changes.”

After numerous issues with the registration system, concerns over postal voting were the motivation for a number of returnees to make the trip back, including for Faredin Shala from Gjilan. “I don’t trust them, that’s why I came here to vote in person,” Shala told BIRN. “As soon as I knew the date of the elections I booked my flight.”

As with the other returnees, hope for a better future helped push Shala to get on the plane back to Kosovo. “I want to see changes in education, health care and the fight against corruption,” he said.