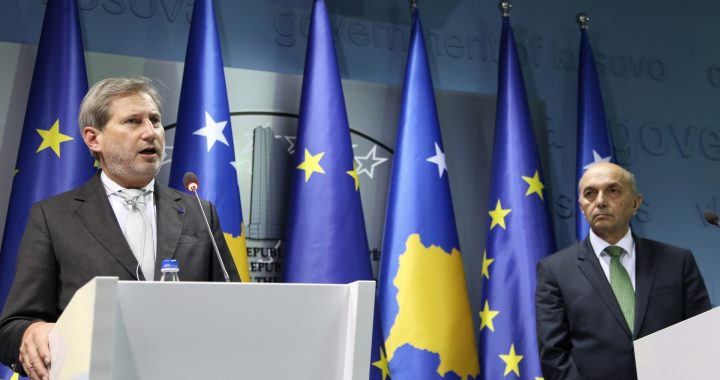 Commissioner Hahn and PM Mustafa at the launching of the European Reforms Agenda. | Photo: European Union Office in Kosovo

Following high-level dialogue on the priorities of the SAA, the Kosovo government has adopted a list of priorities to help implement the first contractual agreement with the European Union.

The agenda comes just two days after the European Commission published its annual Enlargement Package report for Kosovo, which states that overall, Kosovo’s performance in EU-related reforms is in its ‘early stages.’

At a rule of law roundtable discussion hosted by the Group for Legal and Political Studies on Tuesday, Gerrie Willems, Netherlands Ambassador to Kosovo, said the Reform Agenda is a concrete guideline for Kosovo’s progress towards European integration.

“The judiciary is still vulnerable to political influence, the rule of law still suffers, and the fight against corruption and organized crime still needs to be strengthened. The Reform Agenda is a clear list of things that should be tackled, an action plan that provides Kosovo with clear guidelines and deadlines,” Willems said.

The agenda’s three “key areas” are good governance and rule of law, competitiveness and investment climate, and employment and education. Each contains subsequent action items and timelines and lists the responsible institutions.

Actions on the agenda include publishing financial reports for political parties, deciding on power plant ownership modalities for Kosovo B and on new investments in power generation and decommissioning of Kosovo A, and improving quality of vocational training and school-to-work programs.

On Tuesday, particular emphasis was given to the agenda’s task of “reinforcing the capacity of the Special Prosecution Office investigating and prosecuting high-level cases.”

Deputy Chief State Prosecutor Sevdije Morina said that the justice system in general, including the office of the state prosecutor, has weak spots. “But it isn’t always criticized realistically. I don’t agree that prosecutors are nominated from politics. There may be a couple of cases, but the majority have gone through very stringent and regulated procedures based on the law on the prosecutorial council,” she said.

The biggest problem, Morina said, is a lack of qualified prosecutors and resources.

“It is very difficult to meet this criteria. We have a low number of prosecutors and a low budget for the level of crimes and numbers of cases that need to be treated.”

In an EU press release for the Reform Agenda, Hanh said that the EU has already set out 165 million euros for the agenda’s initiatives.

Monitoring will be conducted every six months in collaboration with government, civil society, and the business community.