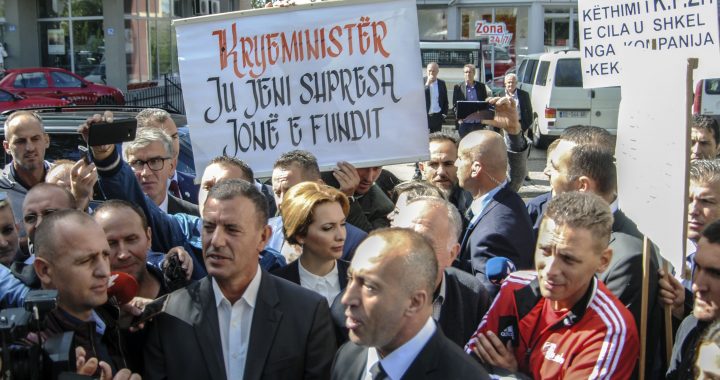 PM Haradinaj meets with residents of Hade and Shipitulla. Photo courtesy of the PM's Office.

Kosovo government will apply the ‘Hade model’ for Shipitulla

Kosovo PM Haradinaj said that the government reached an agreement with residents of the Obilic villages of Hade and Shipitulla to allow KEK to continue its mining operations.

Kosovo will address the concerns of Shipitulla residents–who live on the front lines of  the Kosovo Energy Corporation’s, KEK, mining operations–based on the “model and practices” applied in Hade, announced the Prime Minister’s Office.

Two weeks ago, the Kosovo government had decided to to forcibly expropriate properties in the village of Shipitulla in order for KEK to access the coal-rich land.

Newly elected Prime Minister Ramush Haradinaj visited residents of the Obilic villages of Hade and Shipitulla and pledged to find a solution to their situation.

The fragmented Hade community continues to be insecure and frustrated more than a decade after the resettlements in the village began.

After meeting with residents, Prime Minister Haradinaj said the government reached an agreement to apply the ‘Hade model’ for Shipitulla and the remaining properties of Hade: providing financial compensation for residents and allowing KEK excavators to immediately resume their work.

Economic Development Minister Valdrin Lluka said that both sides–the Kosovo government and Obilic residents–had found a ‘satisfactory compromise,’ reported Koha Ditore. He said that the amount for compensation has not been finalized yet.

“The Hade model foresees the reimbursement aspect. It will be used to avoid complications. The final amount has not been set yet as a bigger problem is finding out the size of residents’ facilities,” Lluka was quoted as saying in the daily.

A press release from the Prime Minister’s Office said that the agreement would also address employment opportunities for the residents of Hade and Shipitulla.

“At the same time, we reached full agreement for these residents to enjoy a right that would prioritize finding a solution to their employment concerns,” the statement, released on September 13, read.

Shipitulla residents had been protesting for several days, trying to prevent the work of KEK’s excavators, which, according to the protesters, had entered unlawfully into the ‘forbidden zone,’ endangering the residents and their families.

According to the residents that still live close to the superficial coal mine, KEK excavators extracted coal 120 meters from the homes, disrespecting a security zone established 250 meters away.

On August 30, the outgoing Isa Mustafa government approved the expropriation of 17 properties in Shipitulla.