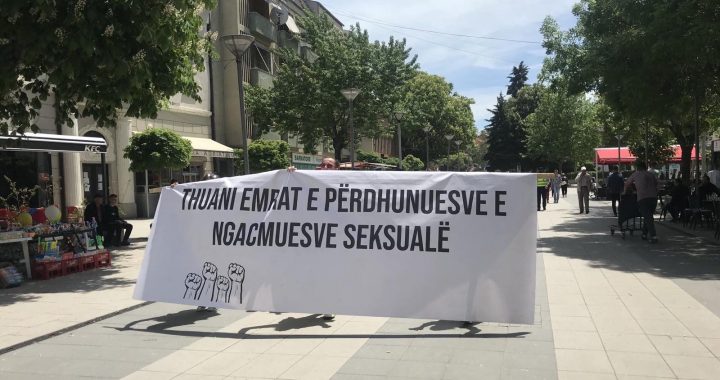 Protesters in Mitrovica in May 2021 hold a banner reading: ‘Say the names of rapists and sexual harassers.’ Photo: BIRN

Prime Minister joins chorus of condemnation of 'shocking' sexist language used by a judges' panel that acquitted five men of sexual abuse in 2012 – saying it underlines need for reform of justice system.

Activists in Kosovo have demanded an investigation into the judges’ panel of the Court of Gjilan/Gnjilane that acquitted five men accused of sexually violating a 19-year-old woman in 2012, after a local media platform at the weekend revealed the highly sexist language the judges had used.

An London-based independent journalist from Kosovo, Vudi Xhymshiti, opened an online petition on Sunday, calling on Kosovo leaders and institutions to take action against the judges.

Xhymshiti told BIRN that the petition, which had gained around 1000 signatures on Monday, was “going well,” adding that once they have 2,000 signatures they will make a press statement, and when they have 5,000, they will officially contact political leaders. “If it is necessary we will organize protests,” Xhymshiti said.

Betimi per Drejtesi (Oath for Justice), a specialized TV show on the rule of law, produced by Kosovo Law Institute, IDK, and the public broadcaster, Radio Television of Kosovo, RTK, on Saturday reported the sexist language used by the panel of the Basic Court of Gjilan/Gnjilane in this case.

She said she couldn’t report the case earlier because she had been kept in a closed place. One of the accused, she said, had taken her by force by taxi to Gjilan and then raped her at an apartment with four others.

But, in their ruling, the judges accused of the victim of “quenching her lust” with the accused and suggested she only reported the case to police because the accused, being a married man, had rejected her. The judges ruled there was no proof that the accused used violence or serious threats to the victim.

“At the time when the harm occurred, of her own she will accepted first, on the critical day, to travel by taxi with the first accused to Gjilan, although she knew he was of the male gender,” they said,

The court concluded that she had an “agreement with them to go on sexual adventures,” adding that she had thereby given her silent consent to the subsequent abuse.

“The victim with her bad habits especially in terms of morals took the opportunity to spend some time quenching her sexual lust with the accused in question,” they ruled.

The court said the victim only reported the case to justify what had happened to her family, and because the first accused had no interest in keeping her with him, because he was married.

The petition calls on President Vjosa Osmani, Prime Minister Albin Kurti, Parliament Speaker Glauk Konjufca, and Minister of Justice Albulena Haxhiu to investigate the judges in the case and dismiss and prosecute them if need be.

“Every minute that this judges’ panel continues to work in the institutions of justice is one more minute’s opportunity for injustice,” the petition reads.

It calls on institutions to “provide mental, emotional and physical medical services for the victim of double abuse,” as well as “compensate financially the damage caused to the victim as a result of the failure to provide institutions that should serve the citizen with justice and not permanent violence”.

The petition also seeks an investigation into all previous court decisions on similar cases.

PM Kurti agreed that the revelations were shocking.

He told the media on Sunday: “The Gjilan case is another proof of the need for reform in our justice system. Women and girls continue being victims … the language in such a court decision is intolerable, and I am shocked by the language used. I am not familiar with the case, but based on what we can see, it is intolerable.”

Many ordinary citizens have joined the condemnation of the judges on social media, among other things requesting a public database of sexual abusers.

BIRN contacted the Kosovo Judicial Council on whether they will start disciplinary procedures against the judges but had not received a response by the time of publication.

This is not the first time Kosovo courts reached similar decisions on cases of sexual violence. In October, BIRN reported a case where the Court of Pristina sentenced a man to only eight months in prison for sexual violence against a 15-year-old, finding several mitigating circumstances.