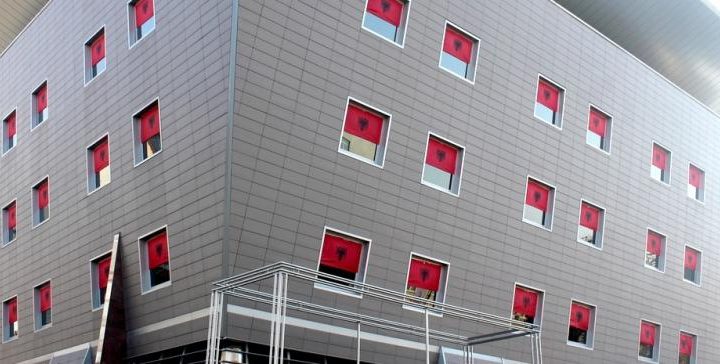 The building of the Academy of Science and Arts of Kosovo. | Photo: Atdhe Mulla

A recent report shows that the Academy of Science and Arts of Kosovo faces ‘a crisis’ in virtually all facets of the institution, including membership and content.

A report published by Integra, an NGO based in Prishtina, called “Crisis in the Academy” highlights numerous issues related to the Kosovo Academy of Science and Arts, ASHAK, including a lack of academic publications within its membership, absolute dominance of male members and Albanian-only content.

The ASHAK is a research institution founded in 1975 by the Kosovo Assembly while the country was part of the Yugoslav Federation.

Until the 1980s, several journals were published in both Albanian and Serbo-Croatian, yet the abolition of Kosovo’s autonomy in 1989 and following unrest that led to the Kosovo war almost completely halted its activity. After the war, ASHAK restarted publishing works and journals.

The report notes that, of the 22 current regular members of ASHAK, only three have publications in international academic journals, a total of 11 papers. Moreover, only half of the 16 correspondent members have published in international journals.

“The 22 regular members of ASHAK, all conducted their Bachelor, MA and PhD studies mainly

in Prishtina, then in Belgrade, Sarajevo, Zagreb and Ljubljana, all universities of former Yugoslavia,” the report reads.

Additionally, the report states that 12 regular members and 7 correspondent members of ASHAK have formerly been part of various political parties in Kosovo, including the chair of the academy, Nexhat Daci, founder of the dissolved Democratic League of Dardania, LDD, who also received an 18 month-long suspended prison sentence in 2012 for abuse of office during his stint as Kosovo Assembly speaker between 2001 and 2004.

“The Academy has historically served politics, both in the monist system and in the

period of the so-called parallel system, and even in the post-liberation period in Kosovo and

after the declaration of Kosovo’s independence,” the report reads, citing Agim Vinca, a contender for ASHAK membership.

According to the report, all of the 22 regular members of ASHAK are men, with an average age of 75 years, while 12 of the 16 correspondent members are also men. The first elected woman, Edi Shukriu, became a correspondent member of the academy only in 2012.

Ethnically, all current members of ASHAK are Albanians. Among the 19 external members, 11 are foreign: two Croats, three Americans, one Brit, one German, two Italians and one Swiss.

In spite of that, none of the the four departments—Linguistics and Literature, Social Sciences, Natural Sciences, and Arts—have publications in any language other than Albanian and Serbian. The total number of publications since its founding is 189.

The report reads that ASHAK became fully independent in 2007, having its own budget from the Kosovo Assembly. Since 2013, ASHAK has received over one million euros of budget annually, making it a total of 10 million euros between 2007 and 2018. Still, two thirds of the yearly budget goes towards salaries and allowances for members, who receive monthly compensation of unknown value due to the lack of financial reports on the institution’s website.

“While royalties for ASHAK’s external associates are offensive, royalties for internal members – regular and correspondent – are monthly and fat,” the report notes.

The report states that two constituents of ASHAK, regular member Sabri Hamiti and correspondent member Arsim Morina, have been publicly accused of plagiarism. The academy has commented on neither of the cases.

Hamiti was accused by professor Sali Bytyci of plagiarizing a Serbian book for a work published by ASHAK itself, and Morina was accused by neurosurgeon Talat Gjinolli of translating and appropriating 26 chapters various English books in the field of neuroscience for a university textbook. Both Hamiti and Morina still enjoy ASHAK membership.

The report highlights that the Law on ASHAK, approved in 2015, requires the institution to report to the assembly, namely its Commission for Education, Science and Technology, every year on its work and accomplishments, yet has not done so in the past three years. Furthermore, the report states that the institution has issues with public communication.

“ASHAK has no public relations office or spokesperson. The official ASHAK website is

unstructured, not updated, and is only in Albanian (there is nothing in English). For the purpose of this publication, the interview request was sent to ASHAK management and

only one responded,” the report reads.

The report recommends that there should be more English-language publications in the ASHAK, as well as have more publications by foreign authors.

English. Also, it would be good to increase the number of foreign authors. Moreover, ASHAK’s

journals should be equipped with international codes and have a peer review,” the report recommends.

Among the other recommendations are that budget should only be allocated for work done within the framework of specific projects, in accordance with the economic situation in Kosovo. The report also recommends that professors should have three to five articles published in international or regional scientific journals depending on their rank, and the institution of a 30 per cent quota for women membership.