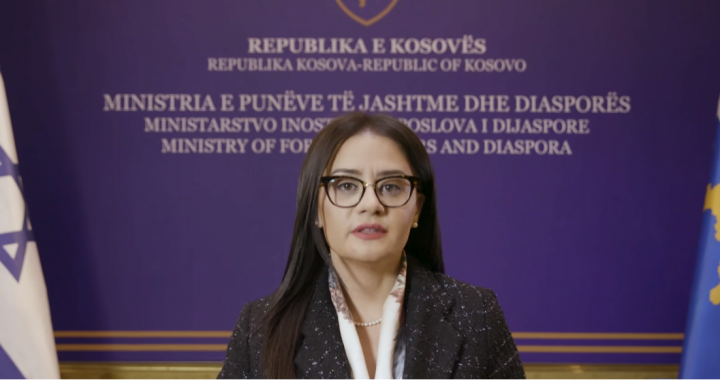 Foreign Minister welcomed establishing formal bilateral relations with Israel, considering it as ‘one of the greatest achievements for Kosovo’ and thanked US for its support.

Kosovo’s Foreign Minister, Meliza Haradinaj, has announced on social media that Israel and Kosovo will establish formal diplomatic relations at the beginning of February, calling it a diplomatic breakthrough and thanking the US for its help.

“Recognition from Israel is one of the greatest achievements for Kosovo, coming at a key moment for us, thanks to the United States of America, our common and eternal ally,” Haradinaj said in a video message.

“This historic moment comes at a very important moment for us and is a perpetuation of this friendship through the signing of diplomatic relations,” Haradinaj added.

Israel and Kosovo first agreed to recognise one another on September 4 last year, when Kosovo and Serbia signed an economic normalisation agreement in Washington under US auspices that included Kosovo’s recognition by close US ally Israel. But no embassies have been opened as yet.

In his phone call, Hoti meanwhile pledged to open an embassy in Jerusalem, not Tel Aviv – drawing criticism from European partners that have mostly held to a policy of not recognising Jerusalem as Israel’s capital ahead of a broad Israel-Palestine settlement.

The EU spokesperson, Peter Stano, stated then that the European Union’s foreign policy remained clear about not opening embassies in Jerusalem. “There is no EU member state with an embassy in Jerusalem, the EU delegation is not in Jerusalem,” Stano said.

“The EU has repeatedly reaffirmed our commitment to a negotiated and viable two-state solution. Part of this two-negotiated solution is also an agreement on final status issues, [including] Jerusalem,” he added.

Apart from the US under President Trump, in 2017, no other key partner to Kosovo has recognised Jerusalem as Israel’s capital.

However, Acting Prime Minister Avdullah Hoti expressed dedication to opening an embassy in Jerusalem a day after the agreement was signed.

Antigona Baxhaku, spokesperson for the Kosovo government, told Prishtina Insight that she possessed no details of the content of the agreement that will be signed next week beyond that it will reflect what was already agreed last year in Washington DC.

A point in the economic normalization agreement included mutual recognition between Kosovo and Israel but did not explicitly state the opening of a Kosovo embassy in Jerusalem.

Mutual recognition is seen as beneficial to both states. Israel has struggled to win recognition from majority-Muslim countries, while Kosovo is still struggling to gain diplomatic acceptance round the world more than a decade after it proclaimed independence from Serbia in 2008. Five EU member states have not recognised it and it is not yet a UN member state either.