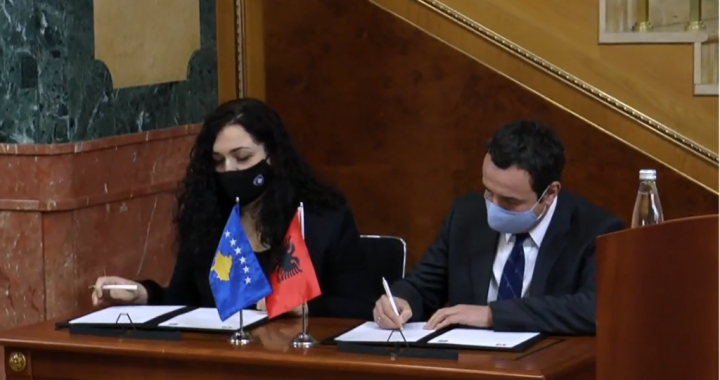 Acting President Vjosa Osmani has announced that she will compete in the elections as part of the electoral list of Vetevendosje and will seek to be elected as Kosovo president by the incoming Assembly.

Osmani stated that an agreement had been reached that “goes beyond” her appearance in Vetevendosje’s electoral list. “For two decades our country has been led with the wrong mindset, to change this we are competing together with a list which speaks as you speak.”

The acting president added that this future can be made possible through a government led by Kurti as prime minister, and indicated that she will seek election as president.

“We will compete for Mr. Kurti as Prime Minister and the re-legitimisation of the presidency,” she said. “I will be the person who seeks to restore this legitimacy. The president represents the unity of the people and this unity is best secured if we return to the people.”

As the current Speaker of the Kosovo Assembly, Osmani has been serving as acting president since November, following former president Hashim Thaci’s resignation.

Kurti stated that he was delighted to announce the cooperation with Osmani, and stated that they will be working towards the same goal.

“2020 has told us that Kosovo needs a new prime minister and a new president,” he said. “We have a president who executed her duties with responsibility and dignity. She has expressed the integrity of the institutions and unity of the people.”