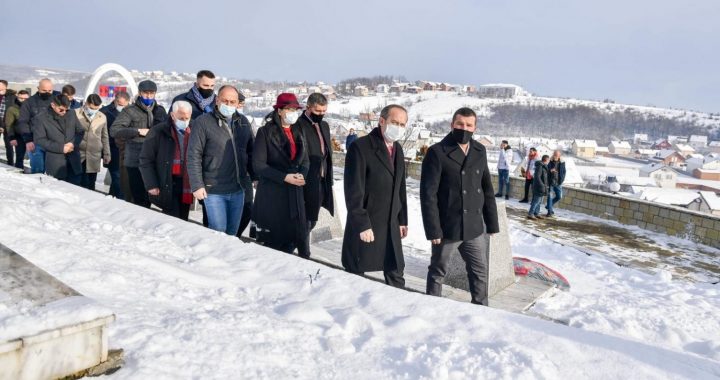 Kosovo’s Justice Ministry took a step towards setting up a new War Crimes Research Institute on the 22nd anniversary of the Recak massacre.

Hundreds of family members of Kosovo Albanian civilians killed by Serbian forces on January 15, 1999 gathered on Friday in Recak, a village 20 kilometres south of Prishtina, to commemorate the anniversary.

Forty-four people are confirmed to have been killed that day, and one woman remains missing.

Visiting the site, Acting Prime Minister Avdullah Hoti said that the victims “will never rest in peace until those who have committed these deeds receive the punishment they deserve.”

“Justice is sometimes delayed but I am convinced it will be served once and for all,” Hoti added.

Two years ago, Kosovo’s Special Prosecution confirmed that investigations were ongoing into “the role of several individuals”. However, no one has yet been convicted under a final verdict of involvement in the massacre.

The leader of Vetevendosje, Albin Kurti, who is running for prime minister in upcoming elections on February 14 described the massacre as a “genocidal act.”

“There can be no lasting peace as long as there is no justice which brings rehabilitation for victims and punishment for criminals,” Kurti said.

On the day of the commemoration, Acting Justice Minister Selim Selimi, set up a working group to establish a new War Crimes Research Institute.

Selimi said that “Kosovo should have an address that future generations can contact to see what happened during the war.”

“The memory of Recak is the memory of our mothers’, sisters’ and childrens cries, which are still ringing in our heads. The aim of this institute is to preserve this memory,” Selimi said.

Serbian security forces surrounded Recak and started attacking it on the morning of January 15, 1999, then entered the village and raided houses. Some men tried to hide but were discovered, beaten, then taken away and shot.

But after visiting the scene of the killings, the head of the OSCE Kosovo Verification Mission, US diplomat William Walker, said that the victims were civilians.

The Recak massacre provoked a shift in Western policy towards Kosovo and became a turning point in the conflict between Yugoslav President Slobodan Milosevic’s troops and police forces and the KLA guerrillas who were fighting for independence.

It became an important factor in NATO’s decision to launch air strikes on Yugoslavia two months later to force Milosevic to pull his troops out of Kosovo.