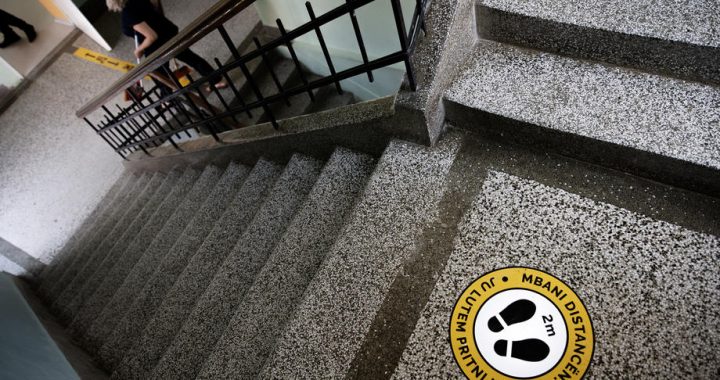 Educational institutions in Peja have rejected allegations of discriminating against pupils from the Roma, Ashkali and Egyptian communities in a festival program.

Numerous reactions have followed a news story shown by local television station Klan Kosova on Tuesday concerning the alleged omission of some pupils from minority communities in a Peja school’s festival.

The festival of the primer ABC-book  is a regular celebration organized after primary school pupils complete a reading and spelling book for beginners.

The TV story showed some pupils from non-majority communities with festive hats being placed in the upper area of the sports hall, where the audience is separated from the pupils celebrating in the centre.

Representatives of educational institutions in Peja have denied that this was an act of discrimination against non-majority students.

The director of the Xhemajl Kada primary school, and the director of education in the municipality, both called it a distortion of reality and a misinterpretation.

Syle Peli, director of the primary school, told BIRN that the separated pupils were not pupils in first grade. They were in intensive learning.

According to him, they had expressed a desire to watch the festival, and were welcomed by the teacher to join it.

“The teacher had an agenda to take the children who were not first-graders to the city park. But, after completing their agenda … we gave them permission to come [to the festival], and they came late, at around 1.30pm, by when the program had been completed, and settled in that [upper] part [of the hall] there,” the school director said.

Peli said that the school had two classes of about 50 pupils in intensive education who had registered late or been repatriated, and are being integrated into the classes alongside other pupils.

He said it was noticeable on the TV screen that these pupils were not six-year-olds, like the others, but eight or nine-year-olds.

According to him, no one needs to take responsibility for this case because it is all just misinterpretation by the media.

The Director of Education in the Municipality, Naser Gega, also told BIRN that the media did not present the reality.

According to him, the separated pupils were in intensive learning and were aged 10 to 16.

“They came to the gym after 1pm. They sat down as they wished and behaved very well. No one stopped them from expressing their feelings. Along with all the other children, they were wonderful,” he said.

Kosovo’s Minister of Education, Arberie Nagavci, on Facebook promised that the case will be considered as a priority on Wednesday with the Directorate of Education of the Municipality of Peja.

“As a minister, teacher, mother and citizen, I condemn any form of discrimination in any relationship, especially when it comes to children, whom we must raise with love and equality in every step of life!” wrote Nagavci.

But later she revealed via Facebook that she had visited the school in Peja, and had been informed that it concerned an intensive learning class with pupils of different ages and grades.

Nagavci said ministry inspectors will now review the information and allegations in detail.

“Concerning yesterday’s case, MEST has sent inspectors who will review the information in detail, while from the visit to the school I was informed that it is an intensive learning class with students of different ages and grades,who had been repatriated or who had left school for various reasons,” she added.

The minister said discrimination has no place in Kosovo schools.

The Minister of Local Government, Elbert Krasniqi, urged institutions to call the responsible persons to account. “As a minister, as a citizen of this community and as a citizen of the Republic of Kosovo, in addition to strongly condemning this gesture, I invite the institutions to call to account the competent persons who made this serious gesture,” he wrote on Facebook .