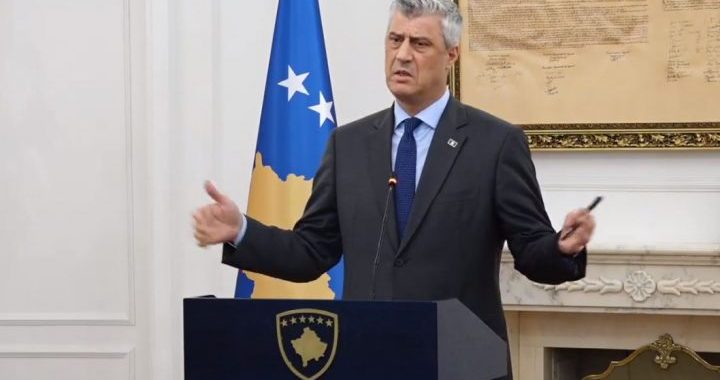 As the number of confirmed cases of coronavirus rises to 61, President Thaci urges citizens and police to disregard newly-approved government measures designed to prevent the spread of the disease that limit freedom of movement.

At an extraordinary press conference on Thursday night, President Hashim Thaci called on Kosovo Police and citizens to disregard new measures approved by the government, which would restrict citizens’ movement in an attempt to control the spread of coronavirus.

The measures will reportedly place more stringent restrictions on both public and private gatherings and prohibit the movement of private vehicles and citizens between 10:00 and 16:00, and again between 20:00 and 06:00.

Exceptions will be made for those with medical needs, those producing, supplying or selling essential goods, as well as essential government and municipal personnel, among others.

Confirmation that the government had approved the new measures requested by the Ministry of Health had just reached the media on Monday night when Thaci began to address the press conference.

“I was forced to call the media tonight at this late hour because of a decision that is dangerous for the citizens and the security of the country,” the president said. “Kurti and his government have flagrantly violated the Constitution of Kosovo.”

“To date, the government has said that the situation is under control, and on the basis of this they have opposed declaring a state of emergency,” Thaci said on Monday night, adding that citizens should not be obliged to respect unconstitutional decisions.

Thaci added that he would address the Constitutional Court of Kosovo on Tuesday, requesting to “suspend and annul the decision.”

Deputy Prime Minister Haki Abazi defended the constitutionality of the measures to the KosovaPress press agency on Monday night, citing Article 55 of the Kosovo Constitution.

Abazi also referred to an assessment of the National Institute for Public Health, who he says have stated that the spread of the virus cannot be prevented efficiently without these restrictions being imposed.

The National Institute for Public Health announced later on Monday that 100 samples had been tested on March 23, with 26 testing positive for coronavirus, increasing the total of confirmed cases to 61.

The Institute stated that all those tested were individuals that had been in close contact with people previously testing positive for coronavirus, in an attempt to trace all known cases. It added that 14 of the positive cases involved residents from the Malisheva region, 11 from Gjilan and one from Gjakova.

On Sunday, a patient suffering from coronavirus died at the Infectious Disease Clinic in Prishtina, the first person in Kosovo testing positive for the virus to do so.