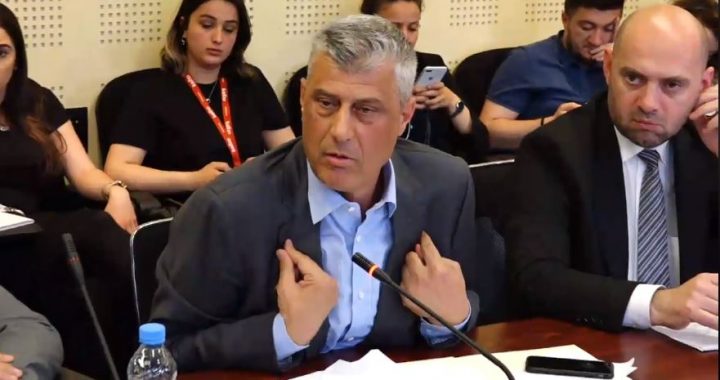 President Hashim Thaci answering to the members of the Parliamentary Commission mandated to investigate the deportation of six Turkish citizens. Photo: BIRN.

The parliamentary commission mandated to investigate the deportation of six Turkish citizens alleged to be members of Gulenist movement has approved a draft report that accuses President Hashim Thaci of being behind the action.

At a press conference held on Wednesday, two members of the Kosovo parliamentary commission investigating the deportation of six Turkish citizens last year, Xhelal Svecla and Driton Selmani, confirmed that its report had been passed on to the Kosovo Assembly.

The draft report was only not approved by Hajdar Beqa and Ganimete Musliu, members of the Democratic Party of Kosovo, PDK, with the other seven deputies that make up the commission all signing it. The report will now be voted on in a session at the main chamber of the Assembly. If it passses, the state prosecution will start an investigation into the case.

At the press conference, Svecla, the head of the commission, accused Kosovo President Hashim Thaci of having “ordered” the deportation of the six Turkish citizens to the Turkish authorities, who were wanted in Ankara for their links to cleric Fethullah Gulen.

In April, President Thaci was interviewed at the Assembly of Kosovo, but the questioning brought no clear results as Thaci contested the report and declined to answer the questions posed by members of the commission.

Instead, the president engaged in an exchange of taunts and accusations with members of the parliamentary commission. “I love you” and “You are so cute Sami” were just some of the phrases that Thaci directed to Sami Kurteshi, a member of the commission from opposition party Vetevendosje.

At Wednesday’s press conference, another member of the commission Driton Selmanaj said: “This was a clear plan to obstruct this report, but we are sure that when there is willingness from politicians, there is no factor that will hamper a process to shed light on the truth, where constitution and its laws are respected.”

According to the commission’s report, the deportation was a violation of human rights. In the immediate aftermath of the deportation last year, the action was widely condemned by local institutions as well as international partners, who demanded that Kosovo authorities shed light on the case.