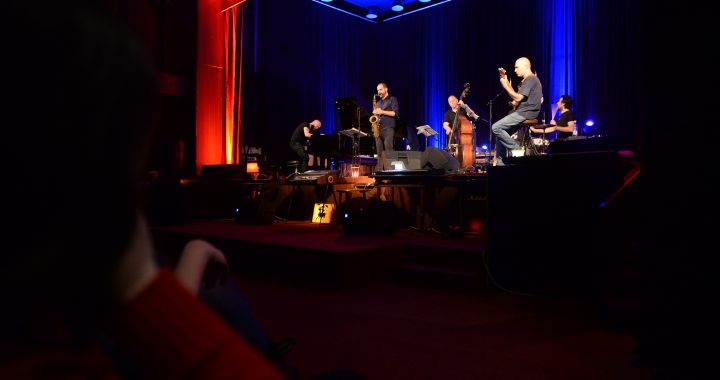 Prishtina is abuzz for Jazz Week

The second edition of Prishtina Jazz Week began on Monday evening, the first of four nights with performances from renowned international jazz musicians from across the region.

The heat inside Kino Armata on Monday night did not stop an electric crowd welcoming Turkish jazz pianist Cagri Sertel and his quintet to the stage for the inaugural performance of the second edition of Prishtina Jazz Week.

Sertel performed his latest record, Instant, with the help of an Sarp Maden on jazz guitar, Volkan Hursever on bass, Engin Recepogullari on saxophone and Volkan Oktem on drums. Mid-way through his captivating set, Sertel laughed after receiving exasperated cheers from the audience, asking if they were too hot.

“Don’t worry, we’re not going to slow down, it’s only up from here!” Sertel reassured the crowd from his piano stool.

Adrian Berisha, co-founder of Prishtina Jazz Week, said that his love for jazz music, the growing popularity of the genre and the clear demand for live performances in Kosovo spurred him to create the week-long event last year along with drummer Nesim Maxhuni.

“Lately, I would say the jazz scene in Prishtina is upgrading, for example we have Zanzi Jazz bar, Dit’ e Nat’, Soma, you have at least two nights of jazz music every week now, and we are so happy for this,” said Berisha.

Kino Armata will be hosting jazz events from Monday until Thursday every night from 20:00. The Yugoslav-era cinema, which re-opened last year, has become a cultural hub in its own right, hosting weekly musical events alongside its extensive film program.

On Tuesday, the Bopers quintet will be performing, bringing the sounds of saxophone, trumpet, piano, double bass and drums from Macedonia to Prishtina Jazz Week.

On Wednesday, Slovenian pianist Marko Churnchetz and his trio will be playing accompanied by US grammy-nominated vocalist Jonathan Hoard.

“At Dit’ e Nat’ on Thursday we will be hosting a workshop as well from 16:00,” said Berisha. “Participants can come, it’s completely free, and talk to Marko Churnchetz, Jonathan Hoard and drummer Kweku Sumbry. They will talk to us and share their stories, and people can learn about styles of jazz, techniques, everything they want to about jazz music.”

The last performance will be from the Albanian Jazz Society on Thursday night, a group of seven of the most influential musicians of the Albanian jazz scene, including co-founder of the Jazz Week Nesim Maxhuni, vocalist Rona Nishliu, and musicians Dukagjin Muhaxheri, Endri Fusha, Ilir Bajri, Visar Kuci and Armend Xhaferi.

“We don’t know exactly what’s going to happen with the Albanian Jazz Society night, but we know that it will be great,” said Berisha.

Berisha, who also works as a cultural consultant for Prishtina Mayor, Shpend Ahmeti, said that his aim is to continue expanding the jazz scene in Kosovo, inviting musicians from the region and beyond.

He hopes to work together with other jazz enthusiasts to bring more music to the country, especially following the closure of the Prishtina Jazz Festival a few years ago.

“We are looking forward to cooperating with jazz musicians more, and we are planning to organize two more concerts in June and July with the co-founder of the Prishtina Jazz Festival, Ilir Bajri,” he continued.

“As long as we’re in charge of this part of the cultural scene, we are going to organize jazz events every year from now on.”

The second edition of the Prishtina Jazz Week will be held from 4-7 March at Kino Armata and Dit’ e Nat’. Tickets are available at Dit’ e Nat’ and Miqt Pub for all musical events, costing five euros. For more information, check out their Facebook page.