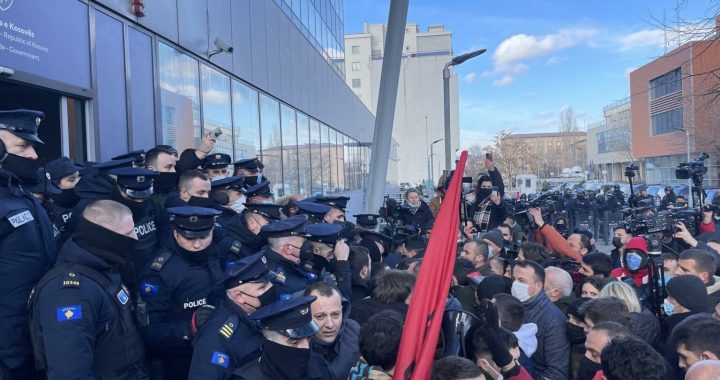 Protesters Over Hike in Electricity Price Scuffle With Police

Responding to the call of the Social Democratic Party, PSD, thousands of Kosovars protested in front of the government building against electricity price rises – resulting in some clashes with police.

The public consultation on the proposal of the Energy Regulatory Office ERO for a major increase in electricity prices in Kosovo ends on Monday, two days after thousands of people joined Saturday’s opposition Social Democratic Party rally against the proposal.

With ironic banners reading “All salaries in electricity”, and others, the protest saw some incidents between the police and PSD officials. At the end of the protest, some people threw candles and light bulbs in the direction of the government building.

A confrontation between the protesters and police occurred when the police did not allow PSD head Dardan Molliqaj to deliver a speech from the stairs of the government building.

The police cordon was broken by the protesters, while in some video recordings Molliqaj could even be seen slapping one of the police officers. Police later announced that during the protest three officers were injured.

During the protest, Molliqaj accused the police of being “politically directed”.

“Three days ago, a protest was held with the same cause and a speech was held here,” Molliqaj said. “Rude and politically directed police, I assure you that we are not entering the [government] building, because we are not that stupid.”

The Kosovo Police Union has called for all of the protesters, including Molliqaj, who attacked police officers, to be investigated.

Police officers were deployed at some different points of the main square shortly before the protest started, to ensure security.

Government spokesman Përparim Kryeziu said after the end of the protest that, despite the efforts to escalate the protest, the police had maintained peace. “For this we thank the law enforcement agencies for their professionalism and patience,” he wrote on Facebook.

On January 26, acting on the call of civil society activists, a peaceful protest was held in Pristina for the same reason.

The ERO is proposing that the price of energy for those consuming over 600 kilowatts be doubled. Nearly 200,000 households during the winter season stand to be affected by the rise. Tariffs for businesses and for the first 600 kilowatts of power used by households will continue to be billed at the same tariffs as they used to be. They will face no increase.