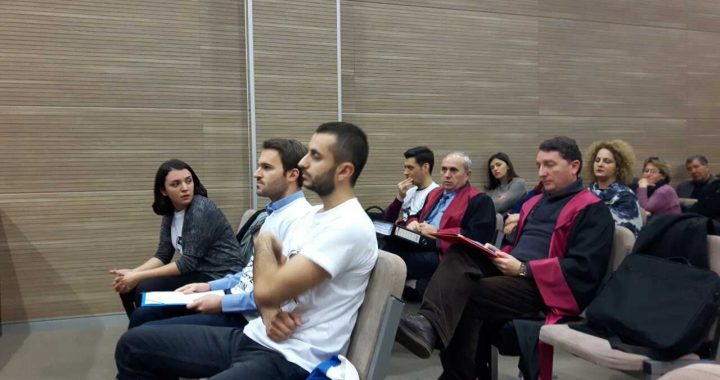 The four Vetevendosje activists accused of attacking the Assembly in their first court session. | Photo: BIRN.

Trial against Vetevendosje activists off to a rocky start

The first session of the trial against four opposition activists charged with attacking the Assembly quickly came to an end when the defense requested the prosecution’s dismissal.

The first court session in the case against Atdhe Arifi, Egzon Halili, Adea Batusha, and Frasher Krasniqi, the four Vetevendosje activists accused of attacking the Kosovo Assembly building with an RPG, was held on Wednesday at the Basic Court of Prishtina.

On August 4, unknown assailants on a motorbike threw an explosive device at the Kosovo Assembly. No one was hurt.

On August 30, the police arrested six Vetevendosje activists, including Petrit Ademi and the late Astrit Dehari, who died in custody before any charges were brought against him. Vetevendosje leaders claim that there was no proof to tie Dehari to the terrorism case and that he was being held unjustly.

The four defendants wore T-shirts with the inscription “Justice for Astrit,” demanding justice for the late activist, who died in mysterious circumstances. Vetevendosje claims that there is no forensic evidence linking its activists to the attack and considers the trial political.

Vetevendosje MPs, including the former Ombudsperson Sami Kurteshi, were present in the courtroom.

Ramiz Krasniqi, the attorney of one of the defendants, requested the dismissal of the Special Prosecution prosecutor Abdurrahim Islami from the case. Krasniqi claimed that Islami had rushed to issue an indictment, although the analysis of the video footage from the Kosovo Assembly on the day of attack has not yet been completed. The footage was sent abroad for analysis.

“We also request the exclusion of the institution of the Special Prosecution of Kosovo from representing the case,” said Krasniqi.

The presiding judge Beqir Kalludra noted to the lawyer that there was no room for political speeches.

The prosecutor also rejected the lawyer’s claims that the case was pressured by politics.

Krasniqi also expressed his doubts about the prosecutor’s objectivity and impartiality, claiming the case against the activists was political.

The prosecutor said he was taken aback by the request, claiming it was “unreasonable.”

The session ended after fierce debate between the defense and the prosecutor. The session will continue once a decision on the defense’s request is taken by the judge.