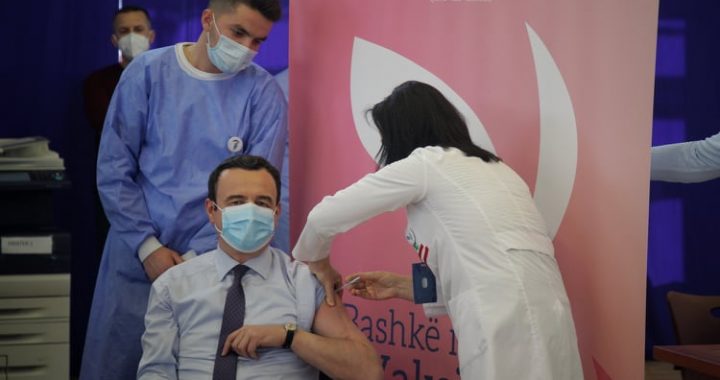 Vaccinations against COVID-19 begin in Kosovo

Prime Minister Albin Kurti has received the first dose of the AstraZeneca COVID vaccine, with the rollout of vaccinations set to get fully underway in Prishtina on Tuesday.

Prime Minister Albin Kurti received the first dose of the AstraZeneca COVID-19 vaccine administered in Kosovo at the 1 Tetori sports hall in Prishtina on Monday.

Dr. Isme Humolli of the Kosovo Office of the World Health Organisation and epidemiologist Dr. Salih Ahmeti were also vaccinated, in a move to encourage Kosovo citizens to take up opportunities to be immunised.

“As Kosovo Prime Minister, I am not here to use the privilege to be vaccinated first but to encourage all citizens to be vaccinated as we receive the first contingent,” Kurti said after receiving the jab.

Kosovo is the last country in Europe to begin vaccinating its citizens against COVID-19, having only received its first contingent of vaccines on Sunday night, when a shipment of 24,000 doses of the AstraZeneca vaccine arrived at Prishtina International Airport.

The delivery was sent as part of the World Health Organisation’s COVAX programme, which has allocated 100,800 doses to Kosovo but has experienced supply issues, delaying distribution. Other attempts to secure vaccines have fallen through, with reported agreements between the Kosovo Government and both Pfizer and the Austrian state failing to deliver.

Earlier on Monday, health minister Arben Vitia was reported to have told a meeting with the Association of Kosovo Municipalities that vaccines are set to be administered from Tuesday at the 1 Tetori Hall and the Infectious Disease Clinic at the University Clinical Centre of Kosovo in Prishtina.

Vitia is also reported to have stated that health professionals, people over the age of 80 and those with serious illnesses will be first in line for the vaccine.

Kosovo has experienced a surge in coronavirus infections over the last week, with over 6,000 newly recorded cases announced by the National Institute of Public Health, NIPH. On Sunday, 914 new cases were announced, the highest number for a 24-hour period in 2021.

According to data from the Hospital and University Clinical Service of Kosovo, there are currently 917 patients being treated in Kosovo’s hospitals, of which 753 have tested positive for the novel coronavirus.

According to the NIPH, 1,844 people that tested positive for coronavirus have died since the first cases were recorded in Kosovo on March 13, 2020.