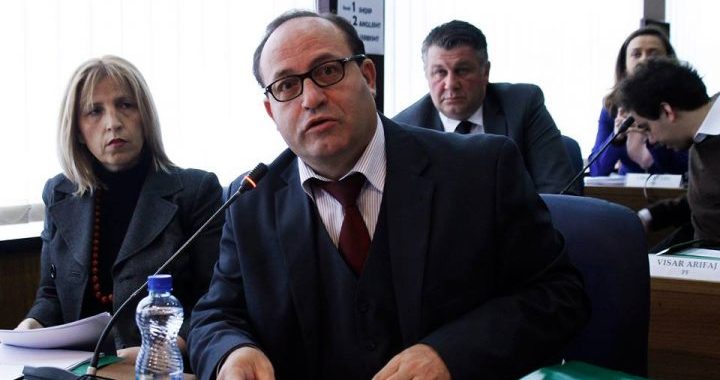 Vetevendosje official Sadri Ramabaja, accused of preparing terrorist acts and the murder of high officials, was detained in Albania and brought to pre-trial court in Prishtina today.

Vetevendosje official Sadri Ramabaja, an outgoing Prishtina Municipal Assembly member, attended a pre-trial court session today as a suspect of planning terrorist attacks and the murder of high officials. He was sentenced with a 30-day detention.

Ramabaja had been summoned by the Kosovo Special Prosecution to appear in court on October 9 to be interviewed for the case, but failed to appear.

Over the weekend, Kosovo Police spokesman Baki Kelani confirmed to BIRN that Ramabaja was stopped by Albanian Police on Saturday night.

“We can confirm that the person with the initials S.R., a citizen of the Republic of Kosovo, was stopped last night by the Albanian authorities at the border exit point of Durres,” said Kelani.

Ramabaja was then extradited to Kosovo Police at the Vermica border crossing, and was taken to detention.

On Monday, Ramiz Krasniqi, Ramabaja’s lawyer, said that his client Sadri Ramabaja wanted to leave Kosovo because he had information from the Kosovo Police that his life was in danger.

On October 1, State Attorney Syla Hoxha confirmed that Ramabaja had been summoned by the Kosovo Special Prosecutor’s Office.

Ramabaja also posted the summon, dated September 25, asking him to appear at the Special Prosecution Office as the suspect of two criminal offenses.

Ramabaja called the Special Prosecution’s summon “political blackmail” and said it was a continuation of the Serbian State Security Administration, UDB, which arrested Ramabaja in October 1981 in Gjilan.

Azem Vllasi, prominent Kosovo lawyer who was shot and wounded earlier this year, told Indeksonline that he believed that Ramabaja was “the ideologue behind the People’s Eye,” an alleged terrorist group targeting high officials.

Vllasi, who was an Albanian political leader in the former Yugoslavia, was shot and wounded in Prishtina in March of this year.

Police arrested suspect Murat Jashari, from Kumanovo, Macedonia, who admitted the charge and claimed that he was motivated by “the damage that Vllasi has caused to young people since the 1980s.”

Later that month, Kosovo President Hashim Thaci said that security institutions were aware of a “People’s Eye” list of 26 individuals that the group aims to kill.

Although Thaci declined to present detailed information on the case, he claimed that “the undisputed facts [about the organization]… lead us directly to Moscow.”