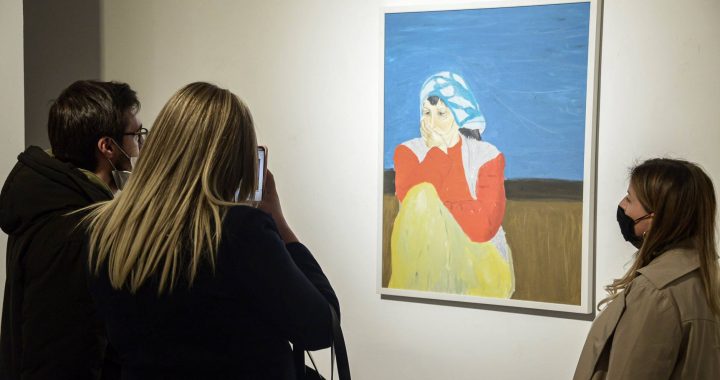 Behind bars in the home

A new exhibition at the Qahili Gallery on the outskirts of Prishtina shines a spotlight on domestic violence and how the family home can become a dangerous place for many women in Kosovo.

A black bullet-proof kitchen apron sits under a spotlight in the Qahili Gallery, a small exhibition space nestled in between Kosovo’s biggest shopping mall and the newly and roughly built Prishtina suburb of Veternik.

In front of the apron, almost protecting it, sits its creator: Arianit Beqiri, a 24-year-old conceptual artist from Kosovo who is taking part in a debate on domestic violence. “Because our society has decided to keep women in the kitchen, we need to take them out of there, as a society,” he says. “Until we do, I want every woman to protect themselves and survive.”

Fittingly, Beqiri’s exhibition, Kitchen Recipes, was on display in the same week that Nuhi Mavroqani, a man from Kamenica, was sentenced to life in prison for killing his wife with a steel baton. It is an unprecedented sentence in a country where dozens of women have been killed by their partners and where, according to a UN report, one in five women experiences domestic violence.

For his first exhibition in Prishtina, Beqiri was inspired to tackle the subject of violence against women and place his mother at the centre of his work. The gallery space is dominated by a photo and a video of Beqiri’s mother, who wakes up in her bedroom, puts on her bullet-proof apron, goes to the kitchen and starts cooking for the family.

The clock on the cooker shows 15:37, a few minutes before her husband comes back from work, meaning that she must be prepared for the “unexpected to happen, just in case.” In the photo, Beqiri’s mother is positioned like a gladiator in an arena: she is alone, anticipating the violence which is brewing in the background, like the Turkish coffee brewing on the stove.

Beqiri argues that for many women in Kosovo, marriage can be a trap, and potentially even a prison. “Some Albanian women have every reason to be worried because they have understood what love is,” he says. “It appears to be that their love is a coronation of marriage to their enemy. But how can you love your executioner? Domestic murders are not only a loss of life, but a loss of love. Thus, I claim, as an idealist, that we have given very little chance to love in our society.”

Another of the exhibited paintings, titled “Mum greeting us” depicts a woman behind bars. During the discussion, Beqiri reveals that he was inspired to paint the scene after seeing his mother watch from the windows as her children left the house.

“It was a cold morning, and she did not come to walk us out like she normally did, but watched us from the window,” he says. “This is when it occurred to me that housewives live a life similar to prisoners.”

Elaborating on the idea, Beqiri points to a number of similarities between the lives of housewives and that of prisoners. “Housewives’ routine is similar to that of prisoners,” he says. “They live behind four walls, they eat at fixed times, they have regular family visits, and if there is sun, they go out in the garden for a walk.”

When asked if his father minded his mother being publicly depicted wearing a bullet proof jacket and behind bars, Beqiri laughs. “He was very attentive to my mum at the opening of the exhibition, he kept asking her if she was cold and if she needed anything.”

The exhibition was hosted by the Qahili family, whose independent gallery takes up the top floor of their family house. The debate on domestic violence was held on December 2, both to complement the exhibition and as part of the 16 Days of Activism against Gender-Based Violence international campaign.

Art historian Nita Qahili tells Prishtina Insight that the gallery arranged the debate as they felt it was important for Kosovo society to address this issue itself.

“I wanted our gallery to mark these days because the debate about this important and taboo topic in Kosovo cannot be a donor-driven conversation,” she says. “We wanted to host a young artist like Beqiri who confronts this topic head-on in this exhibition, which reveals that future generations find it unacceptable to live in a violent society.”

The exhibition is open at the Qahili Gallery until 14 December.