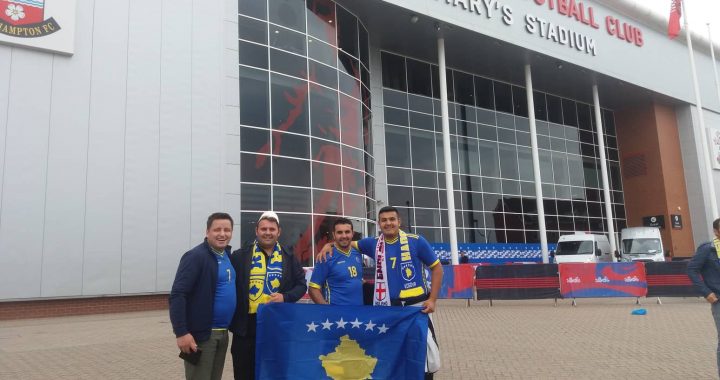 For Kosovo’s diaspora in England, tonight’s match tonight splits loyalties, reinforces bonds and represents a historic moment in a long journey for football in the country.

As fans buzzed around the St Mary’s stadium in Southampton in the hours before Kosovo’s European Championship qualifier with England on Tuesday, the scene had more in common with Prishtina than a city on England’s south coast. The blue and yellow of Kosovo dominated, with the occasional flicker of Albanian black and red more visible than England’s famous red and white.

While Kosovo’s match with last year’s World Cup semi-finalists is huge in footballing terms – with the team’s remarkable unbeaten record receiving its sternest test yet – for Kosovars who have emigrated to England tonight is something even more special.

Of the fans gathered three hours before tonight’s kick off, many were members of the Kosovo diaspora that had relocated to England both before and after the war.

For some, tonight presented a sense of split loyalties. Gezim moved to London 28 years ago, with his children born in the UK. While Gezim was in no doubt about his support for Kosovo tonight, his children were more divided. His daughter interrupted our conversation to insist she was supporting England, while his son wore an England football shirt but was draped in the Kosovo flag.

Gezim wasn’t optimistic about Kosovo’s chances of victory, but felt he had to be in Southampton for tonight’s match. “It’s a great day for us, we’ve been waiting for so many years for this moment,” he tells Prishtina Insight.

Horizont had travelled even further for the match. Originally from Kqiq near Mitrovica, he settled in Barrow-in-Furness in England’s north west, more than 500 km from Southampton and traveled down via Hull in order to take in the clash between England and Kosovo’s under-21 teams on Monday night.

Kqiq was home to one of the venues used when Kosovars played in a parallel league during the troubled times of the 1990s, and Horizont remembers stories of a match being violently interrupted by Serb forces. He feels tonight is a marker of just how far Kosovar football has come. “I’m glad to be part of this history tonight,” he says. “It’s something to tell my children.”

Some members of the Kosovar diaspora also took the opportunity to strengthen bonds between the two countries. Bekim Beka, who is originally from Prishtina but has been living in London since 2003, helped organize a match between fans of the two teams in London on Monday night.

The Kosovar representatives played in kits donated by the Football Federation of Kosovo, with the anthems of both countries played before the match, which was attended by charges d’affairs at the Kosovo embassy in London, Heroina Telaku.

England’s fans won the match 3-2, but Kosovo’s fans seemed to win the affection of Beka’s co-organiser Garford Beck, who described the match as the best his football side had been involved in for some time, and admitted he would not begrudge Kosovo a draw in tonight’s game.

With rumours that more than 12,000 Kosovo fans will be in the 32,000 capacity stadium tonight, Kosovo definitely won’t be short of support on this historic night. For some fans, it’s the match they have been dreaming of for years.