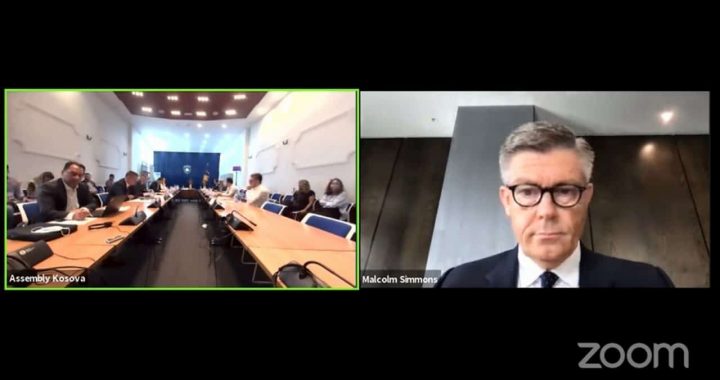 A former head judge for the EU rule-of-law mission in Kosovo, Malcolm Simmons, told Kosovo MPs that the mission failed to deliver justice by prioritising the trials of prominent wartime figures for political reasons.

Malcolm Simmons, a former head judge for the EU rule-of-law mission in Kosovo, EULEX told the Kosovo parliamentary commission on legislation on Monday that the mission prioritised putting prominent wartime figures on trial despite having little evidence, and failed to protect witnesses and deliver justice.

“The mission failed,” Simmons told MPs via a video conferencing link, saying that he was “ashamed of being part” of EULEX, which was the European bloc’s largest civilian mission, deploying judges and police officers to oversee judicial and policing activities in Kosovo.

Simmons first made accusations against EULEX after resigning as a judge in 2017. The EU mission then revealed that Simmons himself was the subject of several investigations into alleged wrongdoing.

He claimed on Monday that the EU mission was more “political” than about the rule of law, and that EULEX would pressure him to appoint judges who were not prone to acquittals because “the success of the mission was measured by the number of punishments.”

He cited two major war crimes cases – the Drenica case in which ten former Kosovo Liberation Army, KLA fighters were all found guilty, and the Klecka case, in which former guerrilla turned politician Fatmir Limaj and nine others were acquitted.

According to Simmons, “there was a lot of pressure on the Drenica case to have punishment” in order for EULEX to demonstrate to Serbia that it was sanctioning Kosovo Albanian suspects for war crimes.

But Simmons claimed the Klecka case would be considered a “joke” anywhere else because of the “weak evidence”.

He alleged that the reason for these major trials, which cost millions of euros, was to remove from the political scene people who were considered obstacles to the EU-mediated Kosovo-Serbia dialogue to normalise relations.

He also claimed that EULEX failed to protect witnesses by not increasing protection measures after one witness in protection died.

EULEX rejected the latest claims that Simmons made to Kosovo MPs, arguing he was “unhappy with all legal proceedings against him.”

It said his claims about the Klecka case are “contradicted by reality” because “the trial panel, which was presided over by Simmons, acquitted the defendants.”

Being the head judge, EULEX claimed that Simmons could have closed the case if he believed there was not enough evidence to hold a trial.

EULEX also pointed out that Kosovo’s Constitutional Court “dismissed a final appeal in the Drenica II war crimes case, upholding five convictions. This refutes all allegations of bias on the side of the first instance trial panel.”

“Witness protection measures were provided in accordance with Kosovo legislation, to witnesses who came forward with evidence and who were credibly proven to be at serious risk after satisfying stringent selection criteria,” it said.

Simmons told MPs on Monday that he was “forced to go public” with his accusations because he was “exposed as a whistleblower”, but that since 2013, he had constantly informed the British embassy in Prishtina and his superiors at EULEX about the alleged misconduct.

But EULEX told BIRN he “formally reported allegations of misconduct involving EULEX and EEAS [European External Action Service] staff only on 2 September 2017; that is, after several disciplinary proceedings for alleged misconduct had been initiated against him starting in October 2016.” EULEX claims Simmons asked for whistleblower protection only after September 2017.

Simmons told the Kosovo MPs that because he has signed Britain’s Official Secrets Act, which bars officials from disclosing confidential information, there was information he could not provide, but that he would be willing to give evidence to the Kosovo parliament if it initiates an official inquiry.