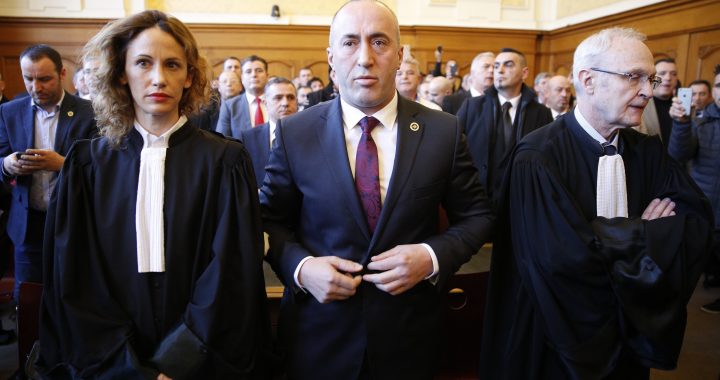 A decision on the extradition of Ramush Haradinaj has been postponed once again by the court in Colmar, France.

For the second time, the Court of Appeal in the French town of Colmar deferred a decision on a request sent by the Serbian state for the extradition of Ramush Haradinaj to Serbia.

Haradinaj, a former Kosovo Liberation Army, KLA, commander and the leader of the opposition party Alliance for the Future of Kosovo, AAK, was detained in France on January 4. Haradinaj was arrested by French authorities at the Euro-airport in Basel/Mulhouse on an Interpol warrant issued by Serbia in 2004.

On January 12, the Appeals Court in Colmar released Haradinaj on bail, ordering him to report to French authorities twice a week.

On Thursday, the court in Colmar decided to extend the deadline for a decision on Haradinaj’s fate until April 6.

Addressing the press after today’s court session, Haradinaj explained that the court had demanded additional information from Serbia, giving them an additional month to work on the case.

“The war of 1998-99 has been filtered through the court in the Hague,” said Haradinaj, who was acquitted of war crime charges by the International Criminal Tribunal for the former Yugoslavia, ICTY, twice. “I’m a political hostage to those who stand behind this decision.”

Haradinaj previously appeared in front of the court and refused to be extradited to Serbia on February 9, claiming that his arrest was “entirely political.”  The court postponed the decision, before extending the deadline further.

“The postponement of Ramush Haradinaj’s detention in France for yet another month is an abuse of justice,” reacted Haradinaj’s party in a press statement.

“The decision is illogical and entirely incomprehensible. It is surprising that French judicial authorities are serving former-collaborators of Milosevic, who, through Haradinaj, are provoking stability and peace in Kosovo.”

The press statement also claimed that Haradinaj’s detention is a “direct attempt” to oust him politically, adding that AAK was convinced that their leader will be released.

“Delayed justice is injustice, and [French authorities] are delaying justice on Haradinaj’s case,” the statement concluded.