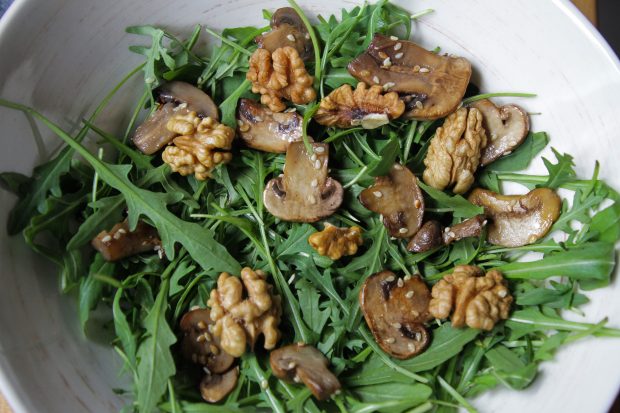 The vegan heavy menu at Soul in Prishtina offers some exciting and adventurous plant-based dishes but attempts to replicate dishes traditionally made with animal products sometimes fall short.

Discussions around vegan food often centre on the potential created by restriction, as having to withdraw animal products from the kitchen can also lead to exciting new possibilities.

It has also become something of a truism that vegan cooking is at its best when vegetables and other ingredients are celebrated on their own merits, but comes unstuck when it attempts to replicate dishes containing meat or dairy.

This last point is certainly true at Soul, a bar with a vegan heavy menu that opened in the centre of Prishtina last summer.

The highlight of the four dishes Prishtina Insight sampled there was undoubtedly a rucola salad, in which rocket, mushrooms and walnuts were brought to life by a mouthwateringly zesty dressing. An agave syrup was used in place of honey alongside some mustard seeds, and the sheer force of its sweet flavour was an absolute revelation.

A vegan take on a stuffed aubergine, a classic of the Balkan kitchen, was also very satisfying. Cherry tomatoes, hummus, lentils, mint leaves and walnuts all created a tasty alternative topping to the two halves of a baked aubergine.

However, attempts to recreate the delights of the meat and dairy world with plant based alternatives fell a bit flat.

The patty in the black bean burger was dry and crumbly, and only served as a justification for the more obnoxious stereotypes associated with vegan food. It was dressed with a mustard seed sauce that almost saved the burger but it had too much work to do, especially as it was spread on bread so crusty it almost became a chore to chew.

A vegan lemon and poppy seed cake also couldn’t compete with its animal-product counterpart. The soft moistness of a truly delicious sponge was missing, and there was an odd aftertaste that couldn’t be explained by the lemons or the poppy seeds. The addition of a peel of lemon zest on top didn’t improve the situation.

I also only learned whether the cake was vegan or not on returning home. While Soul’s Facebook page offers an informative breakdown of each of their dishes, the menu in the bar itself is less helpful, and the staff were also unable to provide much assistance in this area.

The salad and stuffed aubergine reveal that there is clearly a talented chef working at Soul, and more adventurous diners are likely to strike gold if they pick out the right items on the menu. Prices are also very fair, with everything coming in at between two and four euros.

However, any non-vegans overly attached to the joys of a well cooked meat patty in a burger or a soft moist sponge cake are unlikely to be convinced to give up the animal products.