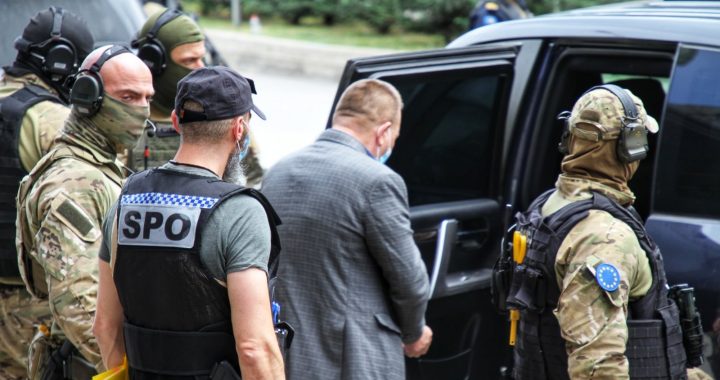 Hysni Gucati, the head of the KLA War Veterans Association, was handcuffed and removed from the organisation’s headquarters by EULEX’s special unit on Friday, with his lawyer Tome Gashi claiming that he is to be transferred to the Hague.

On Friday, EULEX’s special unit arrested Hysni Gucati, the head of the KLA War Veterans Association, after a more than hour-long raid of the organisations’ headquarters in Prishtina.

Gucati’s lawyer Tome Gashi told BIRN that Gucati was set to be transferred to the Hague, adding that no reason was provided for his arrest. Officials from the Specialist Prosecutors’ Office, SPO, were photographed alongside the EULEX Special Unit during the arrest.

Prishtina Insight contacted Christopher Bennett, the spokesperson for the SPO, to enquire about the reason behind Gucati’s arrest but was told no comment could be provided at the time. The raid on the Association headquarters follows Thursday’s arrest of former KLA commander Salih Mustafa.

Gucati criticised Mustafa’s arrest in an interview with public broadcaster RTK on Thursday night, stating that he was convinced that it was based on files compiled by Serbian courts.

In recent weeks, the Association have also claimed to have received three anonymously-delivered batches of leaked documents from Hague Prosecutors. A number of boxes were removed from the headquarters, with around 50 officers involved in the raid.

Speaking to the media shortly after the Special Unit entered the Association headquarters early Friday afternoon, Faton Klinaku, the Secretary of the War Veterans Association complained that the raid was conducted without a warrant and that no translation was provided.

Xhavit Jashari, the head of the Association of Families of Martyrs also claimed that no warrant was provided by the EULEX Special Unit. “We are not against justice but we will not allow anyone at any time to come to our offices without a warrant,” Jashari said.

However, Arianit Koci, a Prishtina based lawyer who has previously defended KLA Commanders at the International Criminal Tribunal for Yugoslavia told Prishtina Insight that the SPO has a mandate to perform searches.

“They have the mandate to do these kinds of raids according to the law,” he said. “If they need the assistance of local structures they can ask for help.”