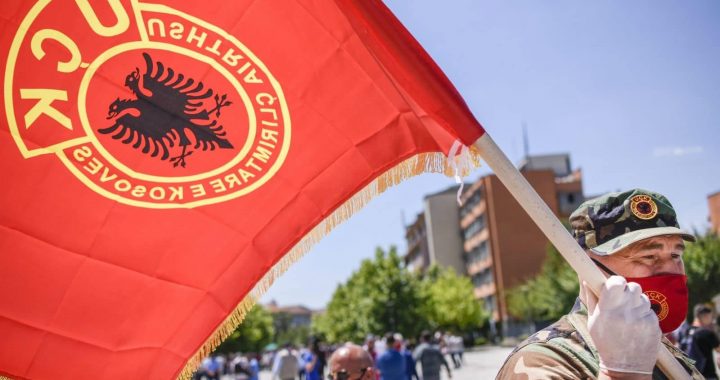 A Kosovo war veteran in a face mask with a Kosovo Liberation Army logo at a protest in Prishtina in July. Photo: EPA-EFE/STR.

Investigators from the Hague-based Kosovo Specialist Prosecution are reported to have taken away thousands of alleged war crimes case documents which had been delivered anonymously to the Kosovo Liberation Army War Veterans’ Organisation.

The Kosovo Liberation Army War Veterans’ Organisation has told BIRN that two investigators from the Kosovo Specialist Prosecutor’s Office took what it said were war crimes case files from the veterans’ offices in Prishtina on Tuesday, a day after it said they were anonymously delivered.

The files allegedly included the names of protected witnesses in cases at the Kosovo Specialist Chambers – the so-called ‘Special Court’ in The Hague that is expected to try former KLA fighters for wartime and post-war crimes.

“We gave them a copy of the files,” said Faton Klinaku, the secretary of the War Veterans’ Organisation.

The contents of the alleged war crime case files are so far unknown and BIRN could not confirm whether or not they are genuine.

The War Veterans’ Organisation announced on Monday that it had been given a package containing more than 4,000 documents.

“Someone wearing glasses and a hat brought 4,000 Special Court files to our offices. This package contains more than 4,000 files including a list of protected witnesses,” Hysni Gucati, the head of the War Veterans’ Organisation, told a press conference.

Gucati claimed the files proved that the Specialist Chambers is biased against Kosovo Albanians and “established to fulfil Serbia’s will.”

A spokesperson for the Kosovo Specialist Chambers, Angela Griep, told BIRN that the court would not reveal any measure that it has taken related to the issue.

The Kosovo Specialist Chambers and Specialist Prosecutor’s Office are part of Kosovo’s justice system but are located in the Netherlands and staffed by internationals. They are expected to try former KLA guerrillas for crimes including murder, torture and illegal detentions during and after the 1998-99 war and were set up under pressure from Kosovo’s Western allies, who feared that Kosovo’s justice system was not robust enough to try such sensitive cases.

In June, the Kosovo Specialist Prosecution announced it has filed a ten-count indictment charging President Hashim Thaci, along with Democratic Party of Kosovo chairman Kadri Veseli and nine others, with crimes including murder and torture. The indictment still needs to be confirmed by a judge.