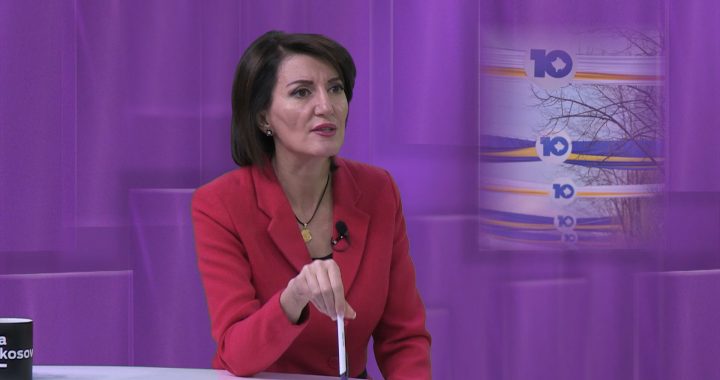 In an exclusive interview for BIRN’s TV programme Jeta ne Kosove, former President Atifete Jahjaga discussed her legacy, Kosovo’s failures, and a luxurious gift she had to return.

The first female president in the Western Balkans, Atifete Jahjaga will be remembered for fighting hard to garner support for survivors of wartime sexual violence and to change the legal framework to provide them with pensions.

“Every time I talk about wartime sexual violence survivors, I cannot talk without emotion. Nineteen years ago we inherited a country that was completely ravaged, not only the infrastructure but also regarding the human aspect. We inherited a country that had around 20 thousand victims of sexual violence, men and women… and to our shame as a society, even after the end of the war, we have covered them with the veil of shame,” Jahjaga said on Jeta ne Kosove.

After establishing the National Council for Survivors of Sexual Violence, Jahjaga lobbied for the recognition of their status as civil victims of the war. Due to her efforts, since February 5, survivors can register for compensation.

But only less than a hundred have registered.

“The process is going well but I am not pleased with the number of applicants and the number of people who seek this right…. I publicly ask every victim to use this legal right of theirs,” the former president declared.

In addition to defending survivors of war, Jahjaga, who was elected president in 2011, became a champion of women’s rights in general.

Earlier this month, Jahjaga was sued for libel by the in-laws of Shyhrete Berisha, a woman who fought her husband’s family for years in court for the right to inherit her marital home. In a recent speech, Jahjaga mentioned Berisha’s case in passing, prompting the family to sue her.

She however does not regret the speech.

“Absolutely not, [I do not regret it] even a bit. Not only for Shyhrete’s case, but every woman who deals with Kanun-based, patriarchal discrimination from society has and will have my unsparing support,” Jahjaga said.

President Jahjaga also discussed a major incident that had occurred during her presidency: in July 2011 a Kosovo Police action, ordered by then Prime Minister Hashim Thaci to regain control of the border in the north, ended with special unit police officer, Enver Zymberi, killed.

For the first time ever, Jahjaga revealed that she had been informed about the action only after it had already begun.

“I was informed only after the operation started,” she said before adding that she had to be informed as the Commander-in-Chief. “It was a regular operation by the executive branch but considering the location it could have turned into a national security issue.”

Discussing her regrets, Jahjaga said she wished she had been more straightforward with other political leaders.

“Maybe I was not that direct towards state leaders and institutional representatives when the state’s interest was at hand,” she said.

Still, she emphasized that she was active while President of Kosovo.

“I have maximally exercised my legal and constitutional competences and obligations,” Jahjaga said.

Discussing the state of the country and the major issues that plague it today, Jahjaga said Kosovo had failed to fight corruption and organized crime.

“Firstly, we failed to distance ourselves from corruption and organized crime… we created a system of clientelism and nepotism. We failed to invest in the pillars of stability, education and health care. Another failure is international isolation… failing to create Kosovo’s army and leaving the country’s perspective in uncertainty,” Jahjaga said.

In the beginning of her mandate, Jahjaga said that she received a gift worth thousands of euros.

“If I am not mistaken, it was during the first or second week of my mandate. It was watch of a great value. It was from a Kosovo business,” Jahjaga said, before admitting that it was a gift sent by the Devollis, a wealthy family that owns some of the largest corporations in Kosovo.

Jahjaga added that she refused this gift through an official letter.

“After learning of its value, I asked for the gift to be returned, as is foreseen by state protocol. The gift was officially returned through an official letter,” Jahjaga said.

“Our company has never sent such a gift to President Jahjaga or any other politician,” the email said. “For your information, the only gifts that we give, as do many other Kosovar companies, are new year’s bundles that contain our products exclusively (milk products and juices) and are given only to our clients or partners. The value of the bundle can be around 10 euros,” the email reads.

Shkelqim Devolli’s company, Devolli Corporation, did not respond to the query.