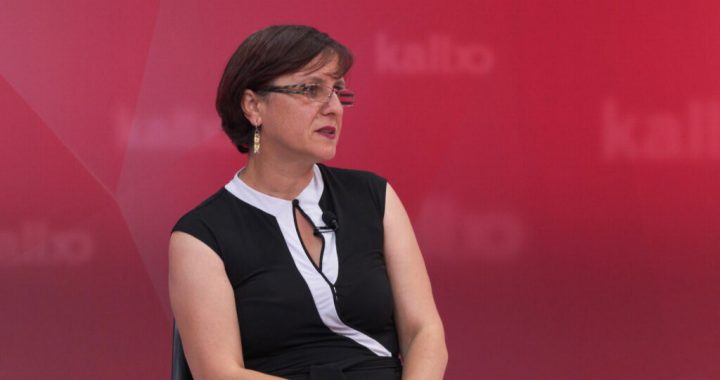 Kosovo Mother Declares: ‘I am Proud of My Gay Son’

Shemsije Musa-Cerkini surprised onlookers when she took to the stage at a Pride parade in Kosovo's capital to declare support for her gay son and other members of the LGBT community in the socially conservative country.

Shemsije Musa-Cerkini left many people stunned when she told the crowd at Thursday’s Pride parade that she supports her gay son.

“I am proud of what my son is,” she declared.

Later in the evening, Musa-Cerkini told BIRN in an interview that she went to the Pride parade “to protect my kid and give support to many other kids who do not get support from their parents”.

“I just wanted to convey a message that parents should be proud of their children whatever their orientations are,” she said.

The parade through the streets of Pristina was the culmination of Kosovo’s Pride Week and was joined by diplomats and civil society activists.

“We are here to show support to the LGBTI community because we think that these are human rights,” US ambassador Jeffrey M. Hovenier said.

Kosovo has often been praised for its legislation on paper when it comes to LGBT rights but criticised on its implementation.

The annual European Commission’s progress report for Kosovo for 2021 noted that the constitution protects against discrimination based on sexual orientation although “public awareness on the rights of the LGBTIQ persons and general acceptance remains low”.

“There have also been incidents of hate speech towards the LGBTIQ community, especially on social media and cases of hate crime against LGBTIQ persons are still not always properly investigated and brought to justice,” the report said.

Musa-Cerkini said that she has supported her son since she first understood his orientation.

“Every parent knows and understands their children,” she said.

“My son expressed his orientation very early. In the beginning I didn’t want to understand him, and I kept saying that he will change as the time goes by. Then I have very openly asked him what is his orientation, how he feels, and he admitted it. He didn’t hide,” she added.

“His orientation does not represent any danger for our family and others. I couldn’t leave him on the street,” she continued.

“Despite our support in the family, he hasn’t been feeling good recently. This pushed me to go public. Parents should be aware of what these children go through. He did not have any problem in the family but the problem was when he went out in the street, what he wears,” she said.

Legal rights for the LGBT community also continue to be an issue in Kosovo, and dozens of human rights activists protested in Pristina in March this year after parliamentarians failed to adopt a draft civil code.

Most of the parliamentarians said the reason was an article in the code that paves the way for the future legalisation of same-sex civil unions, citing family and religious values as the reason for their opposition.

“As lawmakers in Kosovo continue to legislate in this area, we urge them to end the exclusion of same-sex couples from marriage, rather than creating some new, other legal regime,” the letter said.

“Uncertainty around the scope of civil unions puts same-sex couples and their families in Kosovo at risk,” it added.