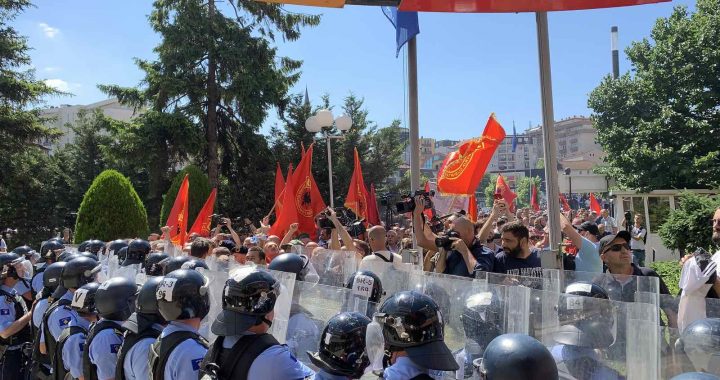 Hundreds of Kosovo war veterans rallied against a bill that does not include them in a proposed minimum wage increase while opposition MPs blocked a parliamentary discussion of the legislation in protest.

Hundreds of ex-fighters of the Kosovo Liberation Army, KLA, gathered outside parliament from the early hours of the morning on Thursday, inside the legislature, opposition MPs blocked a vote on the bill that includes a proposed increase in the minimum wage, but not for veterans.

The head of parliamentary group of the opposition Democratic Party of Kosovo, PDK, Abelard Tahiri, pulled out the microphone from the parliamentary chamber, preventing the session from continuing.

The protest by war veterans’ organisations came three days after ruling coalition MPs voted in a first reading for the legislation which increases the minimum monthly salary to 264 euros, but does not include increases in payments to veterans.

The current minimum wage in Kosovo is 170 euros a month.

Before coming into force, the law must be approved in a second vote in parliament and signed into law by the president.

Prior to the alternation inside the parliament building, Rashit Qalaj, a PDK MP, backed the protesters and said the opposition will not allow parliament sessions to be held.

“All of us today should feel ashamed, and especially those who voted against the inclusion of veterans in the minimum wage,” Qalaj said.

“I think that this parliament cannot hold a normal session until the law is reviewed. There should be no parliament session today. Neither today, nor tomorrow, nor the day after,” he added.

Leaders of KLA war veterans said that they will not stop their protests until government withdraws the legislation and said they could mount a legal challenge.

“If the prime minister [Albin Kurti] does not reflect and the law is promulgated, I guarantee you that we will refer the law to Constitutional Court and I am 100 per cent sure that the court will conclude that they are violating the law and the constitution,” the acting head of the War Veterans’ Organisation, Faton Klinaku, told the crowd.

“We will install tents [in front of parliament] and will stay for days and nights until the government agrees [to the demands]. We will be on the streets,” Klinaku added.

On June 6, police used pepper spray against veterans who tried to get inside the parliament building during a previous protest over the minimum wage issue.