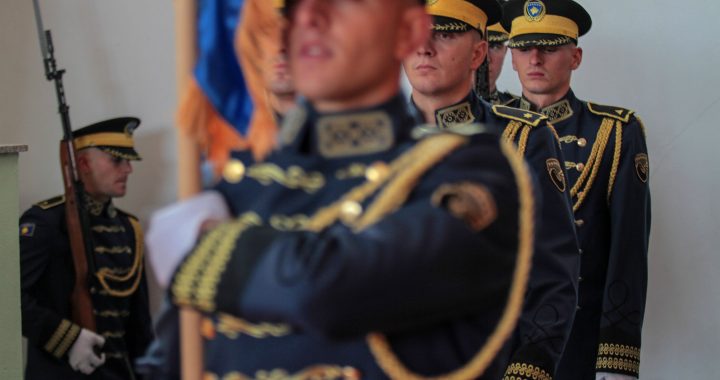 Kosovo Security Force to partake in US peacekeeping missions

Government officials and security experts hail a hugely symbolic moment for Kosovo after the Assembly approves a decision for KSF members to participate in international peacekeeping missions as part of the Iowa National Guard.

On Tuesday, the Kosovo Assembly unanimously backed a proposal by the acting government to deploy members of the Kosovo Security Force, KSF, in international peacekeeping missions under US Central Command. The government approved a decision to deploy troops to serve as part of the Iowa National Guard on December 31, following an invitation by the United States.

All 92 MPs present at the extraordinary session voted in favour of the proposal, with representatives from all Kosovo Albanian parties in the parliament backing the motion. Acting Prime Minister Avdullah Hoti stated that by approving the decision Kosovo is “taking responsibility for global peace, well being an overall security.”

In an interview for BIRN, Anton Quni, Kosovo’s acting defence minister, hailed the parliament for backing the motion, describing it as “one of the most historic moments in modern times.” Quni added that the process had been conducted in close cooperation with US military authorities, and that deployment may be to southeastern Africa or the Middle East.

Mentor Vrajolli, the executive director of the Kosovo Security Studies told Prishtina Insight that it was a hugely symbolic moment for the country.

“It shows that Kosovo has matured as a state,” Vrajolli said. “Our society is not only a consumer of international peace and security anymore but a state which is capable of exporting security, and contributing to peacebuilding elsewhere in the world.”

Vrajolli added that it will also give more prominence to Kosovo’s efforts to align itself with Western allies, and give a boost to its state building efforts. However, the security expert believes that the current capacities of the KSF mean that its contribution to international peacekeeping missions is almost entirely symbolic at this stage.

“The KSF is still in its early stage of transition and still has not developed its full capacities as a military,” he said.

Acting Defence Minister Quni conceded that sending troops on these missions would be costly, with around 260,000 euros required to cover each troop deployed for a year in peacekeeping missions. According to Quni, the budget for the KSF in 2020 amounted to 62 million euros.

The KSF is currently undergoing a transformation into an army, after the Assembly expanded its mandate in December 2018. The KSF is expected to have 5,000 members and 3,000 reserves by the time the process is complete in 2028.

Quni told BIRN that the KSF is currently upgrading its weaponry and that when the full capacities of the KSF are reached “anyone who targets the territory of Kosovo must think carefully.”

He added that capacities have already been built to assess military capacities in the region, and that the Military Intelligence Service has been growing since its establishment alongside the KSF.