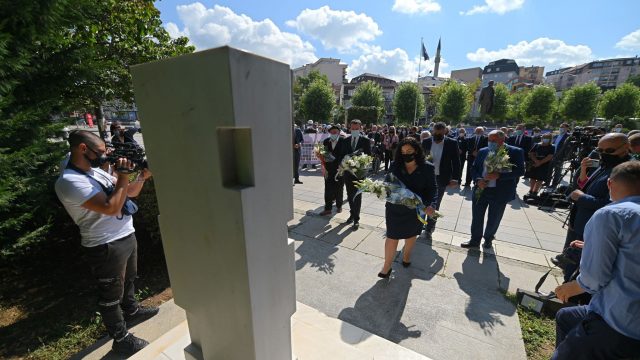 At a ceremony to mark the International Day of the Disappeared, Kosovo Prime Minister Albin Kurti called on Serbia to open up its state archives to reveal where the remaining wartime missing persons are buried.

Prime Minister Albin Kurti asked Serbia on Monday to open its state archives relating to the 1998-99 war in Kosovo, arguing that “as regards missing persons, the answer lies there [in Belgrade].”

Kurti was speaking at a ceremony in Prishtina to mark the International Day of the Disappeared. Along with Kurti, Kosovo President Vjosa Osmani laid flowers at a monument dedicated to missing persons in front of the premier’s office in Kosovo’s capital.

A total of 1,632 people are still listed as missing from the war – most of them Kosovo Albanians, but also some Serbs.

Kurti said that “missing persons will always be a main topic in our relations with Serbia.”

“We cannot pretend to have either a sustainable or secure future if we do not address the issues of the past,” he added.

Kosovo has been negotiating with Serbia for ten years in a European Union-facilitated dialogue process intended to normalise relations, but no progress has been made on the issue of missing persons.

But Kosovo officials have argued that the Kosovo Liberation Army did not have such archives because it was a guerrilla force and Kosovo was not a state at the time.

Five mass graves have been found in Serbia since the fall of Yugoslav President Slobodan Milosevic in 2000, a little over a year after NATO forced him to withdraw from Kosovo. The remains of more than 900 Kosovo Albanians have been found, but no one in Serbia has been held responsible for the systematic effort to conceal evidence of war crimes.

Also on Monday, the International Commission on Missing Persons, ICMP, which has played a major role in helping to find those who disappeared during the 1990s wars in the Balkans, published a practical guide for families of the missing who are still searching for their loved ones.

“The guide explains practices and principles applied in the countries of the former Yugoslavia in their efforts to account for persons missing as a result of the 1990s conflict. It is the product of many years of first-hand experience on the part of ICMP staff, and intensive communication with families of the missing, scientists, scholars, researchers and professionals from domestic institutions,” the ICMP said.

The ICMP noted that 40,000 people went missing during the 1990s wars, but so far, more than 70 per cent of them have been located.