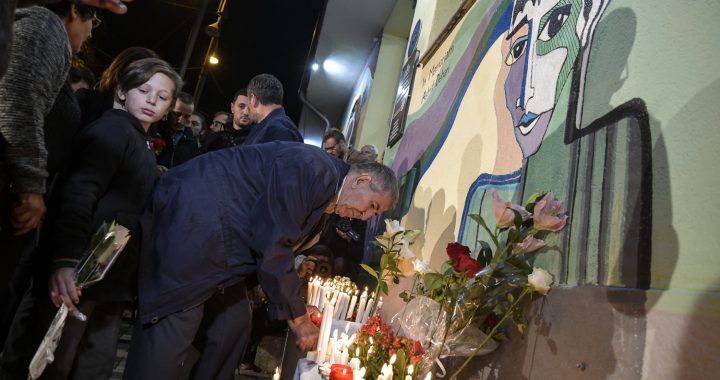 Calls for further protests demanding a new inquiry into the death of Astrit Dehari were announced at a public manifestation remembering the former Vetevendosje activist and supporting his family’s search for justice.

Thousands of citizens gathered in Prishtina on Monday night to remember Vetevendosje activist Astrit Dehari and offer support to his family, who are still seeking to clarify the circumstances of his death at a Prizren jail on November 5, 2016.

The manifestation was organized through a public Facebook page named ‘Une jam Astriti’, (‘I am Astrit’), which describes itself as the official website through which Kosovo’s civil society will seek justice for Astrit Dehari. Candles were lit and flowers were laid in memory of Dehari, underneath a mural of the Vetevendosje activist painted on Rexhep Luci Street in the center of the city.

The gathering came after extracts of a report compiled by the University Center of Legal Medicine in Lausanne appeared in the Kosovo press last week. The report suggested a new investigation be launched surrounding the death of the Vetevendosje activist and contradicted earlier assertions that Dehari committed suicide.

The Basic Court of Prizren stated on Thursday that the investigation into Dehari’s death will now continue. “Based on the findings of the report, the prosecution will continue its investigation of this case and will take all the necessary actions,” the court announced.

Astrit’s father, Avni Dehari thanked all of the participants at the memorial for their solidarity, and for remembering his son. “With the new report from the Swiss experts, the conclusion that Astrit committed sucide is over,” he announced. “The first phase of the battle has been won. Now is the second phase: to put all those that directly and indirectly participated in the killing of our son before justice.”

Jeta Berisha, a civil society activist that spearheaded protests calling for a public investigation into Dehari’s death in November 2016, announced that a further protest will be held at Skanderbeg Square in Prishtina on November 5, the third anniversary of Dehari’s passing.

“Let tonight’s gathering be the first expression of our revolt against the institutions for not shedding light on the killing of Astrit Dehari in these past three years,” Berisha told the assembled crowd. She added that the members of civil society behind the new wave of protests were demanding a new, credible investigation team, and a transfer of the case from the Basic Court of Prizren to Kosovo’s Special Prosecution Office. For the activist, it is now essential that a new, independent and transparent investigation follows.

Astrit Dehari was arrested on August 30, 2016 as one of six Vetevendosje activists suspected to have attacked the Kosovo Assembly building three weeks earlier on August 4.

After his death on November 5, 2016, following 68 days of detention, initial police statements claimed that the activist died on the way to the hospital due to medication the deceased had ingested, while an autopsy report published later that month declared that the cause of death was self-inflicted asphyxiation.

In December 2016, the Dehari family’s attorney, Tome Gashi, published a report citing independent experts’ opinion that there were signs of self defence and claimed that Dehari was murdered. Four days later on December 20, 2016 an extraordinary session was held at the Kosovo Assembly that committed the government to an external investigation financed by the state, with the Swiss forensic team engaged in the process in February 2017.