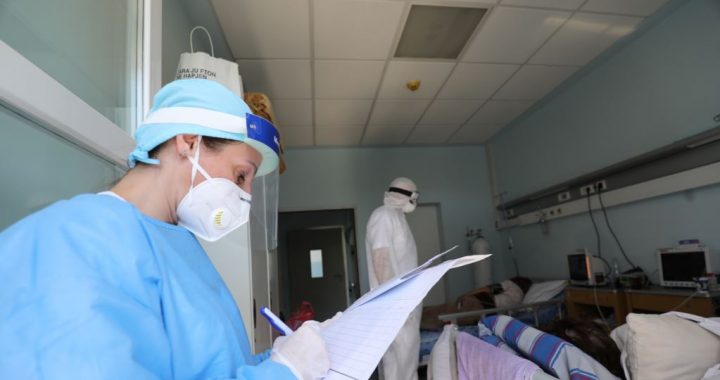 Treating patients in a pandemic

In a BIRN debate broadcast on Tuesday, health workers, public officials and members of civil society talked over how Kosovo’s health system has continued to provide services throughout the coronavirus crisis.

The COVID-19 pandemic has presented many challenges to Kosovo’s public health care system. As well as handling the sometimes overwhelming number of COVID patients, Kosovo’s hospitals and Family Medical Centres also had to continue to provide pre-existing services.

Health institutions often had to be resourceful. Reporting from BIRN broadcast on Tuesday as part of its debate on health services during the pandemic, revealed how the regional hospital in Gjilan eased pressure on its overburdened wards by introducing mobile teams of health professionals.

Since July last year, more than 10,000 patients in the Gjilan region have been offered medical assistance in their homes by these mobile teams.

Ukshin Ismajli, the acting director at the hospital said that despite the challenges involved in organising the mobile teams, including having to reassign some members of an already stretched workforce, Gjilan Hospital was able to continue offering emergency services throughout the crisis.

Ismajli specifically highlighted the maternity ward, which he said was always able to provide essential services, including emergency operations. He added that the initiative did not require a significant level of investment, with only transport costs needing to be covered, and also lowered expenses for patients requiring medical services.

Appearing alongside Ismajli in the BIRN debate, journalist Leonora Aliu stressed the importance of lowering health care costs in Kosovo, especially with the pandemic still ongoing.

“Around 30 percent of the population are unemployed, citizens do not always have access to public health institutions, and they don’t have the means to use private institutions,” Aliu said.

She highlighted the cost of taking a D-dimer test, a key indicator for whether a COVID-19 patient is entering a dangerous phase of the disease. The test costs 70 euros, which Aliu pointed out would eat up most of a basic monthly pension payment. “How can you then buy other drugs?” she asked rhetorically.

Head of the Health Department at the Municipality of Prishtina, Bujar Gashi, also hailed the initiative in Gjilan. However, he said it would be impossible to implement the same service from the Municipality-run Family Medical Centres in Prishtina due to the capital’s large population and a lack of capacities.

Gashi stated that Prishtina’s Family Medical Centres have continued to provide health care services throughout the crisis, but revealed that demand had dropped dramatically citing fears of infection. “From a typical average of around 8,000 different services per day, in 2020 that average was around 2,000,” he said.

“There were problems with a lack of essential drugs and a lack of capacities in hospitals to treat those with COVID-19,” he said. “Patients were often told to stay at home.”

Meanwhile, Ferdane Asllani from the Balkan Sunflowers Kosovo NGO, said that institutions had been absent when it came to providing Roma, Ashkali and Egyptian communities with assistance, medical or otherwise.

“NGOs went door-to-door to inform people how to protect themselves from COVID-19,” she said. “It was us who distributed masks and other protective measures for the community.”

Participants in the debate also discussed the ongoing rollout for vaccinations against COVID-19 in Kosovo.

All of the roughly 24,000 doses of the AstraZeneca vaccine Kosovo received through the COVAX programme in March have been administered, while a contingent of just over 4,600 doses of the Pfizer / BioNTech vaccine received from the EU began to be distributed to health workers on May 5.

Kosovo has so far relied completely on donations, having failed to secure a single dose of any vaccine against COVID-19 directly, while the number of citizens vaccinated is the lowest in the region.

However, Hana Xhemajli, an independent researcher on health issues believes that the rollout will gather pace in the second half of 2021. “I have hope that our allies will help us,” she said. “I’m optimistic that by the end of the year we will have vaccinated 60 percent of the population.”

Other panelists, especially those in northern Kosovo, revealed that they have found other means of being vaccinated. Milica Ristovic, a volunteer nurse from Leposavic stated that she was vaccinated in neighbouring Serbia, which had a huge surplus of vaccines in the first half of 2021.

“Many of us were vaccinated in Raska and other municipalities [in Serbia],” she said. “I took the Russian ‘Sputnik’ vaccine.”

Mustafa Skenderi, who is from North Mitrovica also crossed the border in order to receive a vaccine. “Yes I was vaccinated with the Chinese vaccine and I spoke Chinese all day,” he joked, before encouraging citizens to seek vaccination through any available means.

“Any vaccine that you can take, do it!” Skenderi said. “I wholeheartedly recommend it.”