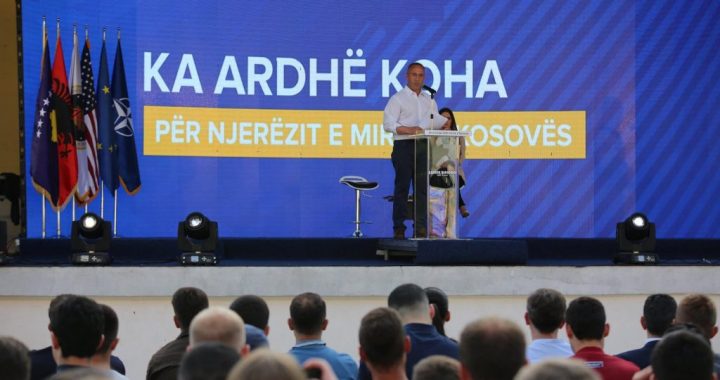 "The time has come for the good people of Kosovo," reads the slogan of AAK during parliamentary elections in June 2017. Photo: BIRN.

“It is unfair to point the finger at AAK, because in comparison with the others, AAK comes out as an angel,” said Muharrem Nitaj, Kosovo Assembly MP for the Alliance for the Future of Kosovo, AAK, the party of Prime Minister Ramush Haradinaj.

Nitaj’s reaction came after media reported on Monday that Egzon Nitaj had been hired to the IT department of the publicly-owned regional waste management enterprise, Pastrimi.

“I cannot understand this campaign to attack people who earn 300 to 400 euro salaries through their sweat, and presenting this as if it was a danger the state is facing,” said Nitaj in his response. “The damage to the public interest happens from the misuse of millions through nepotism of a higher level, and not because someone gets a job contract.”

This is the first of at least six individuals reported in the last month to have been appointed to positions within state-owned enterprises that have connections to the governing coalition.

Media outlet Koha.net reported that the AAK MP’s other son, Genc Nitaj, was hired at Post and Telecommunications of Kosovo, PTK, in the marketing department in August 2018. When Nitaj was hired at PTK, the enterprise was being managed by Gent Begolli, a well-known member of AAK.

Responding to criticism from the media upon his son’s appointment to PTK, Nitaj said that he “doesn’t believe that his son should pay the price because his father is an MP at the Kosovo Assembly.”

Genc Nitaj is among the 2,500 employees at PTK, with more than 230 reported to have been hired only during the term of Haradinaj’s government, from February 2018 to February 2019.

Naser Bujupi, the husband of another AAK MP, Donika Kadaj-Bujupi, was also employed as a sales agent at PTK in August 2018.

This happened only five months after Kadaj-Bujupi returned to AAK in March 2018, after spending two years as a member of opposition party Vetevendosje.

Nitaj justified his sons’ appointment to positions in public enterprises through the existence of transparent processes of employment. However, one AAK-affiliated individual won a position without announcement that the job was available.

On March 15, Vesmira Haxhaj-Haradinaj, the sister-in-law of Haradinaj, became the deputy director of finance at PTK, in absence of a call for applications for the position. Her salary was confirmed to be more than 2,000 euros per month.

In January, the Kosovo government initiated preparations to to privatize the public enterprise, as in the last three years, “the financial losses have varied from eight to 52 million euros annually,” said Minister of Economic Development, Valdrin Lluka.

In March 2018,  BIRN discovered past political ties and friendly relations between newly-appointed board members of PTK and Haradinaj’s party.

Allegations of nepotism in PTK do not end with AAK.

In March, it was reported that Shaqir Qerimi, the 60-year-old father-in-law of PDK MP Mergim Lushtaku, was employed as a PTK sales agent. In the same month, it was discovered that is daughter, the wife of Lushtaku, became the auditing director at PTK.

Although the Kosovo government has signed a three year memorandum of understanding for cooperation with the British embassy to monitor the recruitment of top public posts, BIRN found that Haradinaj’s cabinet did not take into account the recommendations by the British vetters.

On March 18 this year, in a  conference organized by British embassy on the results of the implementation of the memorandum, Haradinaj said that there are “shortcomings” in appointment process of the recruitment to top positions. “These flaws and omissions should be treated,” Haradinaj added.

However in the same month, governing parties voted at the Kosovo Assembly for Naser Shala to be appointed as head of the Kosovo Property Comparison and Verification Agency.

Shala’s selection was met with a fierce reaction from the British embassy and politicians from Kosovo opposition due to Shala’s ties with the governing parties and his lack of experience making him suitable for the position.

“There are people who have not worked for years and now have got a job. I could have indirect influence, but I did not hire anyone,” said Haradinaj on Sunday, justifying the influx of people from AAK gravitating to Kosovo Telecom.