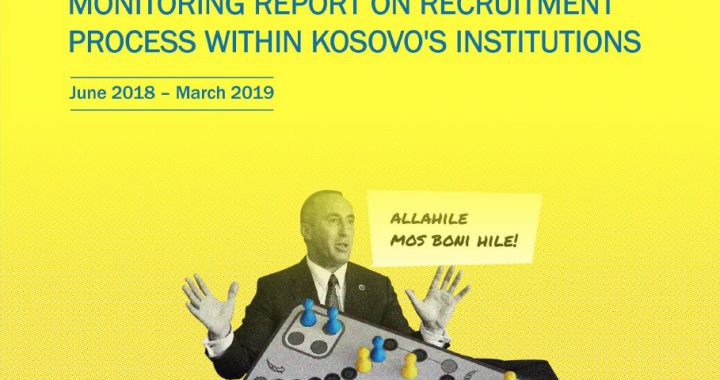 BIRN Kosovo’s report providing details of its monitoring process for the recruitment of high-level positions in Kosovo’s public institutions was published.

BIRN Kosovo published the Recruitment Monitoring Report, ‘Carving up the pie’ in March, detailing the successes and failures of the supervised recruitment procedures of high-level public institutions in Kosovo.

The report contains data gathered during the period June 2018 to March 2019, and provides analysis from the direct monitoring of 32 job vacancies. 14 of these vacancies were conducted with the assistance the English recruitment company BDO.

BIRN Kosovo conducted this supervision within the framework of the project, ‘Monitoring of Recruitment Processes of senior managing positions,’ which BIRN is implementing in cooperation with the British Embassy in Kosovo.

The report finds that the institutions of Kosovo failed to implement the agreement signed with the British Embassy by appointing individuals that did not meet the criteria to be hired for senior positions, according to the assessment of British experts.

The members of Kosovo Assembly voted to hire the candidate considered appropriate in BDO’s assessment only once, out of the six occasions where filling the vacancy required approval from MPs. In total, from the beginning of the British Embassy support to Kosovo institutions in the area of recruitment in 2016, 10 vacancies ended with the appointment of unqualified persons to the advertised positions.

In some cases, BIRN was not allowed to monitor important vacancies issued by the institutions of Kosovo. The Government of Kosovo did not allow BIRN to monitor the vacancies for the boards of 14 public enterprises. Furthermore, the monitoring of the vacancy for Kosovo Police Director and Deputy Director, as well as the monitoring of some senior positions issued by the Office of the President of Kosovo, were rejected.