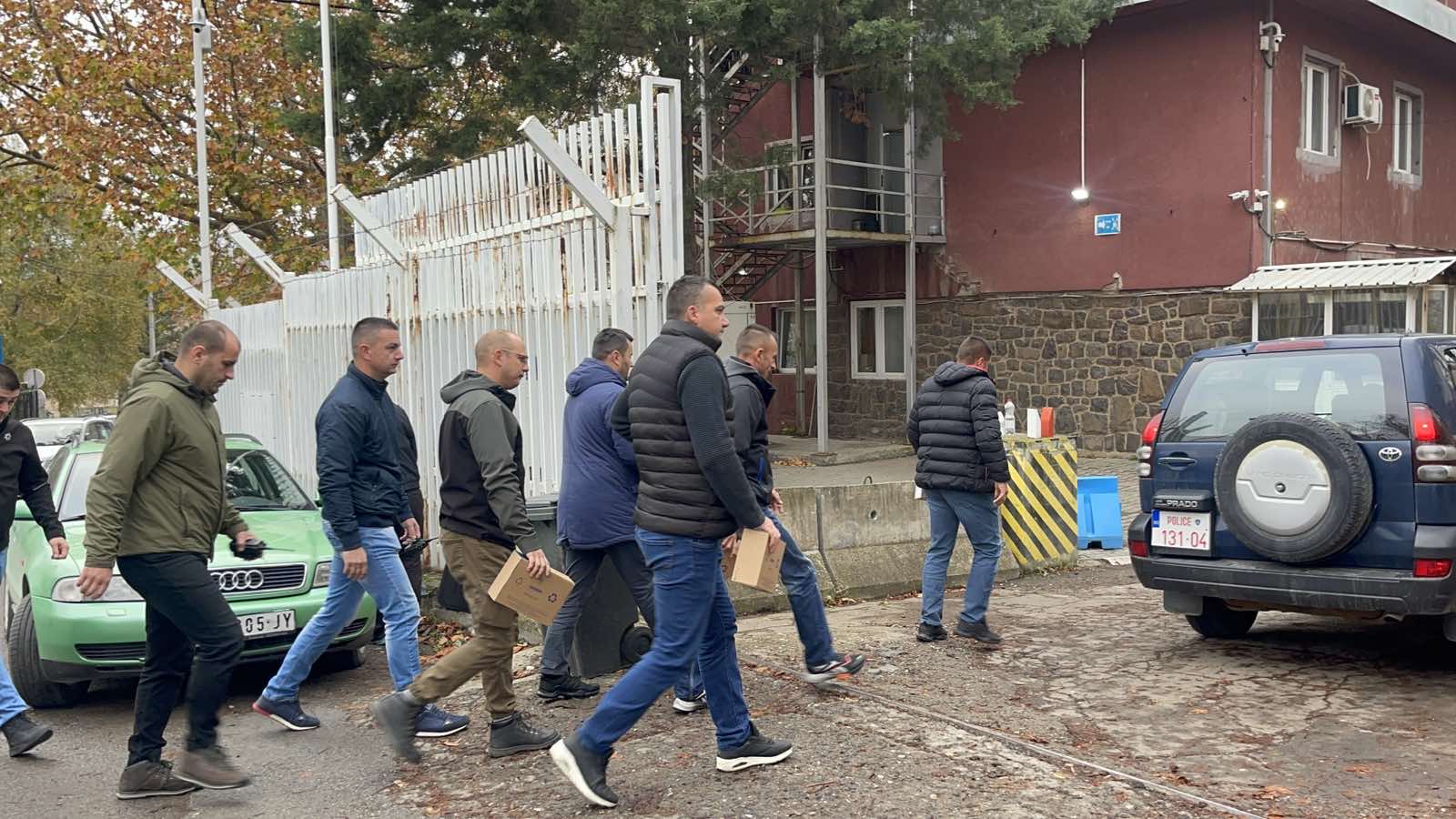 Ten MPs and four mayors of the Serbian-majority municipalities in the north have resigned, joining other officials who left Kosovo institutions on Saturday as EU calls for Serbs to return.

On Monday many policemen, some organized and some individually, marched towards the police station in North Mitrovica, to hand in their guns and handcuffs, after they resigned from their positions from Kosovo institutions on Saturday.

They were joined by the 10 members of the Serbian List party in the Kosovo Assembly who also submitted irrevocable resignations.

The resignations come after the suspension of Nenad Djuric as director of the Kosovo Police in the North following to his refusal to follow government orders and issue reprimands for drivers of cars with illegal Serbian license plates.

“We are in constant contact and communication, regular meetings with international security bodies such as KFOR, EULEX, but also with our partners such as [the] QUINT [countries]. So we share information and prepare well for whatever mischief the miscreants may do,” Kurti said on Sunday.

Kurti added that the security situation in Kosovo was being endangered by “various criminalized individuals and groups”.

On November 6, Serbs protested peacefully in Czar Lazar Square in North Mitrovica with Serbian flags and various slogans to the sound of Serbian nationalist songs.

“We are all Nenad Djuric”, “Today Nenad Djuric, tomorrow every Serb in Kosovo” and “There is no going back from here,” were some of the banners of the protesters.

The head of Serbian List, Goran Rakic, former Minister for Returns, during the protest called for the establishment of the Association of Serbian-majority municipalities in Kosovo and the implementation of the Brussels Agreement.

The EU High Representative, Josep Borrell, on Saturday called on the government to postpone the deadline for re-registration of illegal Serbian number plates and the suspension of any punitive action against such license plate holders.

He also called for the establishment of the long awaited association of municipalities with a Serbian majority. Meanwhile, the EU asked Kosovo Serbs to return to institutions.

Spoke this evening to both President Vucic @predsednikrs & PM @albinkurti.

Called on both sides to refrain from any unilateral actions which might lead to further tensions.

The Czech Presidency of the EU called on representatives of the Kosovo Serbs to return to institutions in Kosovo.

#CZPRES calls on Serbia and Kosovo Serb representatives to return to the Kosovo institutions. We call on both sides to refrain from any action that would lead to violence and confrontation. The Association of Serb Majority Municipalities must be established. ⬇️

The Minister of Defence, Armend Mehaj, said Serbian military manoeuvres on the border with Kosovo, as well as the decision by Serbs to leave the institutions of Kosovo, were attempts to destabilize the country.

“We condemn such an approach that is clearly contrary to the spirit of dialogue and also to the new reality of Kosovo. These actions are the only obstacle to reach an agreement that would allow both countries to move forward to integrate into the European Union,” wrote Mehaj on Facebook on Sunday.

The President of Serbia, Aleksandar Vucic, said on Sunday that it is important for Serbia to behave “seriously and responsibly”.

“We are talking about major political tectonic changes. After 10 years, the Serbs have decided to leave the institutions of Pristina”, Vucic told Pink Television.

The latest developments worry the Kosovo opposition, as they do not have the back of the international community, according to them.

Neither former prime ministers of Kosovo, that of the Democratic League of Kosovo, Avdullah Hoti, and the ex-PM from the Alliance for the Future of Kosovo, Ramush Haradinaj, are supporting Kurti.

Hoti said Kosovo is right to take action regarding the number plates issue, but if such action doesn’t have the support of the international community, it is not in the interest of Kosovo.

“If these actions of the government, which are right but do not have the support of friends only in terms of the time of their undertaking, lead to a situation where instead of Kosovo institutions, KFOR and EULEX are activated to maintain order and security in those municipalities, then it is clear that this policy … has not served the interests of the state,” wrote Hoti on Facebook.

Haradinaj on the other hand said Kurti is not interested in the security of Kosovo.

“The people of Kosovo and our security allies know very well the intentions of Serbia, its sponsors and satellites. But the United States, through its officials, from Ambassador Hovenier to Secretary of State Blinken, has asked Kosovo to suspend the decision on license plates until the final Agreement. This request was joined by QUINT countries and other NATO countries, our allies in security,” Haradinaj wrote on Facebook.

Serbs resigned from their positions in state institutions in four Serb-majority northern municipalities of Kosovo on Saturday, claiming that EU-mediated agreements between Serbia and Kosovo in Brussels are being breached.

The resignations came after a meeting in the town of Zvecan organised by Belgrade-backed Serb party Srpska Lista.

The government decided last week to postpone implementation of the decision to make drivers with vehicle license plates issued by Serbia change them for Kosovo plates from November 1.

Drivers continuing to use Serbian plates will initially be reprimanded, then fined, then forced to attach probationary plates to their cars.

There will now be a phased implementation of the change to Kosovo plates which will continue until April 21 next year.