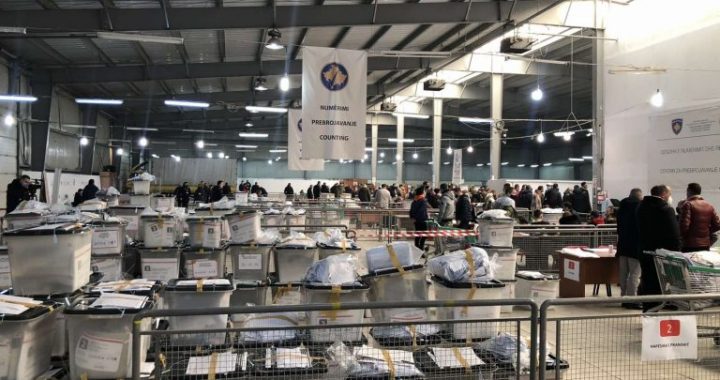 Eighteen days after Kosovo’s parliamentary elections on February 14, final results have been announced by the Central Election Commission with Vetevendosje extending its lead in first place.

After the counting of postal votes concluded late on Wednesday night, Kosovo’s Central Election Commission have announced the final results of the parliamentary elections held on February 14.

Vetevendosje have further increased their winning margin, having received more than 75 percent of postal votes, and just over 50 percent of conditional votes. The party recorded a final result of 49.95 percent, the largest vote share in Kosovo electoral history.

PDK are confirmed in second place with 16.9 percent, while LDK came in third having recorded 12.64 percent of the vote – a drastic decrease from the 24.5 percent the party received in October 2019.

The results mean that Vetevendosje has won 58 of the 120 seats in the Kosovo Assembly, with a majority of 61 required to form a government.

Party leader Albin Kurti stated on Wednesday that the party will “not make compromises with the old regime” in order to form a parliamentary majority, and plans to cooperate with MPs representing Kosovo’s non-Serb ethnic non-majority communities.

In opposition, PDK will have 19 MPs in the new legislature, while LDK will have 15, and AAK will be represented by eight MPs after winning 7.07 percent of the vote.

However, NISMA will not be allocated any seats in the Assembly after the party did not pass the five percent threshold required for parliamentary representation.

The Belgrade-backed Srpska Lista have again won all 10 seats reserved for Kosovo Serbs in the Assembly after receiving just over 45,000 votes. Its closest rival Gradanska Inicijativa Za slobodu, pravdu i opstanak (Citizens’ Initiative for Freedom, Justice and Survival) received just over 1,500 votes.

Of the four seats reserved for Kosovo’s Roma, Ashkali and Egyptian communities, two have been won by Romani Initiative – a newly formed citizens initiative that has faced accusations of collaboration with Srpska Lista after receiving large numbers of votes in Serb-majority regions. The two remaining seats will be allocated to the Ashkali Party for Integration and the New Democratic Initiative, who will represent Kosovo’s Egyptian community.

Kosovo’s Bosniaks will be represented by one MP each from Ujedina Zajednica – Adrijana Hodzic, UZ-AH, Nova Demokratska Stranka, NDS, and the VAKAT coalition. UZ-AH has also been accused of collaborating with Srpska Lista after receiving a huge share of its vote in Serb-majority municipalities.

Political subjects competing in the election now have 24 hours to lodge appeals to the Elections and Appeals Panel, ECAP, before the CEC can certify the election results. ECAP is legally obliged to respond to any complaints within three days, while ECAP decisions can also be appealed at the Supreme Court.