Bruni: Italian decadence to luxuriate in 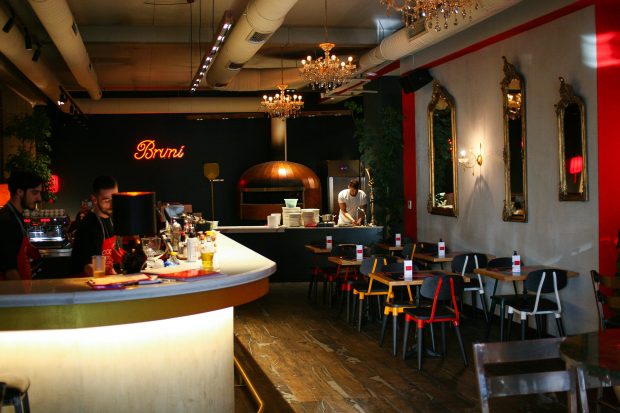 Bruni, a newly opened restaurant in Prishtina, has a refreshingly simple concept: They sell pizza. And they sell cocktails...

There are a few antipasto plates offering a handful of cheeses and meats to snack on, as well as some much needed roughage in the form of rocket and roasted peppers. However, the clear star of the show is a distinctively Italian selection of pizzas.

Alongside pizzeria staples like the Margherita and Capricciosa, Bruni’s menu also offers a few of Italy’s more decadent toppings, including truffles atop its Tartufata. ‘Nduja, Genovese pesto, prosciutto crudo and burrata are also scattered across the selection, while a Kosovar twist is put on the pepperoni pizza with local suxhuk taking the place of salami.

The burrata in particular is a revelation. Nestling atop the centre of the pizza, this ball of Apulian cheese has lost nothing on its journey to the Balkans, oozing stracciatella once it is cut open and providing a wonderful milky freshness.

The pizzas themselves, cooked in a monster of a wood-fired oven on display in the restaurant’s open kitchen, are also more than up to scratch. The tomato sauce is sharp and tangy, while the dough is light enough to make devouring a whole pizza in a single sitting a remarkably easy task given their size.

Alongside the pizza list there is also a second menu at Bruni that contains well over 25 cocktails, including both Italian and American classics as well as a range of flavoured margaritas, daiquiris, caipiroskas and mojitos.

In the name of public service, Prishtina Insight tried a wide range of the selection on offer. The Old Fashioned is missing a slice of orange peel but is a satisfying enough attempt, while the Moscow Mule is sour in all the right places. There’s also a delightful tartness to the blackberries in Bruni’s Bramble, and the Long Island Iced Tea is its usual deceptive self.

The lively tech-house playlist emanating from the speakers might be a bit imposing at lunch time, but Bruni is clearly hoping to establish itself as a location for the later hours, with an opening schedule set to extend to midnight when the plague is finally over. The friendly, young staff add to the vivacious atmosphere, and when nights out are finally a fixture of contemporary life again, Bruni does indeed promise to be an excellent night out.

It will, however, come at a cost – prices for the more decadent pizzas reach up to seven euros, while the cocktails all come in at around five. There are times though, during a global pandemic for example, that life’s luxuries are worth paying for, and nothing at Bruni is priced exorbitantly.

Doing one thing and doing it very well is an often overlooked accomplishment, while doing two things very well can only be considered an even greater achievement. With their pizzas and cocktails, Bruni are most of the way there.