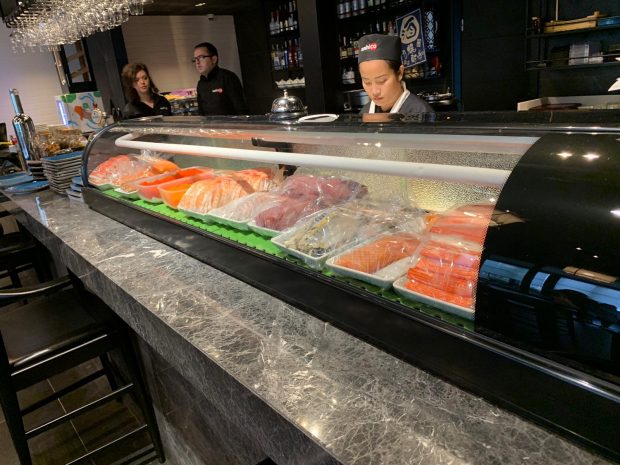 With stylish setting, elegant presentation and the biggest selection of fresh sushi and Asian fusion dishes in the city, newly-opened SushiCo is impressive, but its novelty certainly comes at a price.

Hidden behind the Newborn monument and just a stone’s throw away from the Fadil Vokrri Stadium lies the Japanese restaurant SushiCo. Opened on March 4, Prishtina’s third sushi restaurant is already receiving presidential acclaim. Hashim Thaci himself has tasted the many choices on SushiCo’s broad menu twice, the waiters told us, watching over the city from his own private dining room upstairs.

Almost out of view, in between the trees, a set of stairs painted with pink blossoms lead to the main entrance on the first floor. Although the grey, concrete building has been freshened up with some new black paneling,  this does not help to make the outside view more appealing.

The inside makes up for the underwhelming exterior, however. Large glass windows that open out into an outside dining area, lampion-style lighting fixtures and a great mural of a giant diving koi carp across one wall make it feel like we were entering a chic restaurant in downtown Tokyo.

In Kosovo, excellent fresh fish or sushi restaurants can be hard to come by, even in the capital. Despite that, a display case near the entrance shows a wide variety of fish. Because SushiCo is part of a successful chain of sushi restaurants first established in Turkey, with other locations in countries like Albania, North Macedonia and Iran, the restaurant can offer fresh fish from the waters of Germany, Norway and Turkey, instead of relying on local fishermen or imports from nearby.

The menu has a broad choice of sushi, meat and even a full page of the menu dedicated to vegetarian dishes. Groups dining together are especially lucky, since the restaurant also offers different kinds of business lunch menus. Hungry guests can start with an appetizer by ordering edamame beans, yakitori or crispy chicken, for between three and five euros. Salmon or shrimp appetizers will set you back a little more, ranging from five to eight and a half euros.

Vegetarians can enjoy vegetable noodles, a vegetable bun or fishless sushi like the quinoa avocado roll, with individual dishes never going above seven euros. A 16-piece vegetarian set menu with avocado and radish maki, Japanese omelette nigiri and vegetable sushi rolls with a tasty side of seaweed, sesame seeds and shredded cucumber will cost you 12 euros, pricey but satisfying.

Fish sushi, the most important dish of the restaurant, comes at a price. While sushi plates are quite affordable, starting at four euros (saba roll, six pcs.), menus are expensive – varying from seven and a half euros (hot nigiri plate, with four kinds of fish) up to 27 euros (sushi prince 2, 24 pcs.). Unsurprisingly, the price is reflected in the clientele – our table is surrounded by groups of expats, entrepreneurs and even the president of Kosovo, who is seated at a private table upstairs as we dine.

Like in any other sushi restaurant, your weapon of choice is a set of chopsticks, perfect for skillful people and a nice traditional way to eat sushi. Luckily for the people who are not used to this way of eating, forks are available on request. This particular weapon might look out of place in an Asian restaurant, but it ensures that your meal is still at the right temperature while eating.

The first bento box we ordered, bento menu 3, is served in a luxurious black box. Only after the cover is lifted by the waiter are the fresh-looking noodles and soy beans revealed.  Presenting it in a chic black container with smaller dark red bowls inside to hold the sushi and edamame beans gives the dish an almost presidential or – from the Japanese perspective – imperial appearance.

The taste was slightly less imperial. Although the California rolls tasted fresh, they also lacked excitement. The avocado, cucumber and crab did not stand out, while the taste of tobiko, the bright orange flying fish roe sprinkled on the outside, was very present. The same applies for the sesame maki roll. The taste of mango was overwhelming and made the taste of the other ingredients fade away.

The sesame seeds that the roll was coated with, usually aiming to provide a little extra bite, was not as crunchy as it should be. The sake roll, though, was full of taste. The salmon, avocado and mayonnaise roll was the most outstanding dish on the plate, since the edamame did not impress either. A few flakes of salt over the beans would do the trick.

Rather than filling up on raw fish rolled in rice, some people prefer to come to Japanese restaurants to burn their taste buds away with spicy food. For those people, it might be tempting  to order bento menu 2, the bento box menu with a red pepper sitting next to its name, to warn eaters that it might be spicy. Those people are in for a rude awakening. The crispy chicken with ginger was supposed to offer some heat, but after it was finished the only thing that stood out in our mind was how dry the chicken was. Although dipping the chicken in the sharp but sweet red sauce saved it a bit, the juiciness of chicken was nowhere to be found.

It might be that SushiCo has a different understanding of the word ‘crispy’ than we do, but the chicken above-mentioned and crispy wonton were not crispy at all. Like the chicken, the wonton was a bit dry. The meat inside was tasty and fantastically seasoned, but you had to fight your way through the Sahara desert to get to it. The only thing that was crispy and spicy, was the spicy cabbage salad, more peppery than the chicken but without a warning sign on the menu.

The last dish in the box was vegetable noodles. Between the noodles, crunchy red peppers and green beans we found only two pieces of broccoli, which was a little disappointing, but still the best dish in the box.

Would we ever return to SushiCo? Maybe for another shot at exchanging a few words with the president. Otherwise, we would take our money elsewhere.