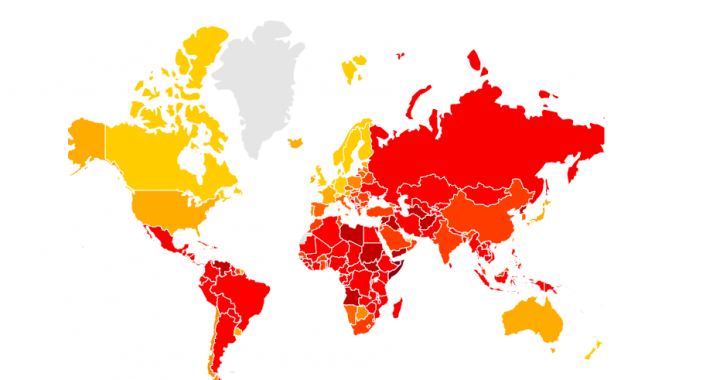 Kosovo falls in the ranks of Transparency International’s corruption index

Transparency International’s 2019 Anti-Corruption Perceptions Index reveals that Kosovo’s efforts combating public sector corruption is perceived to have worsened over the last 12 months, losing three points and dropping from 93rd to 101st in the international rankings.

According to Transparency International’s annual Index measuring perceived levels of public sector corruption, Kosovo ranked 101st of the 180 countries or territories evaluated. Kosovo has dropped eight places in comparison to last year, when it was ranked 93rd out of 180.

Kosovo scored 36 points on a scale of 0 to 100, with 100 marking the clearest perceived transparency and 0 denoting the highest levels of corruption, demonstrating a continued high level of perceived corruption in the public sector. The score also dropped from last year, when Kosovo scored 39 points.

Among Kosovo’s neighboring countries, Montenegro was top ranked, scoring 45 points out of 100, followed by Serbia on 39, while Albania and North Macedonia both scored 35 points.

The report spoke of the potential for change possible following the expected change of government. “Kosovo is experiencing a shift in parliamentary power that could offer an opportunity for change,” the report reads. “After years of criticizing the government and the international community in Kosovo for their failure to address corruption, the Self-Determination (Vetevendosje) party, which recently won a majority of parliamentary seats, has a chance to demonstrate its commitment to combating corruption.”

The report praised Vetevendosje for being one of the few parties that responded to requests to disclose election campaign costs, but added that it remains to be seen whether a new government would live up to a higher standard of political integrity. “It can do so by abandoning the usual practice of political appointments in state-owned enterprises and by establishing a strong legal obligation for financial disclosure by political parties,” the report concludes.