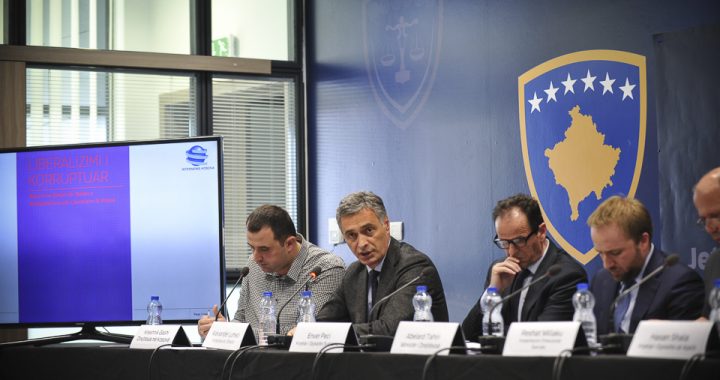 Kosovo is stalling on the completion of court cases earmarked to track progress in the fight against corruption, a new report by BIRN says.

After Kosovo’s ratification of the border deal with Montenegro, country has one final condition for a visa-free regime in the Schengen Zone: an improved track-record in the fight against corruption and organized crime.

All eyes are on the Kosovo judiciary, which is supposed to close 39 earmarked cases—19 of which are still ongoing—before Kosovo can get the green light for visa liberalization.

But a lagging judicial process, data discrepancy and poor communications between the Kosovo prosecution and the judiciary system are some of the main factors stalling the completion of high-profile corruption and organized crime cases, according to a new report titled “The corruption of liberalization.”

Presenting the findings of the court monitoring report by BIRN and Internews Kosovo at the Palace of Justice on Wednesday, Labinot Leposhtica criticized the Kosovo Prosecutorial Council, KPC, and the Kosovo Judicial Council, KJC, for having disparate files on the cases.

“There’s a discrepancy between the data that the Prosecutorial Council and the Judicial Council have,” explained Leposhtica.

Similar issues occur in the Prishtina Basic Court and the Appeals Court – the latter does not even have a database of earmarked cases.

The main burden falls on the Basic Court in Prishtina, which is currently processing 15 out of the 19 cases, while two cases are in Mitrovica, and one each in Prizren and Ferizaj.

“On average, 110 days pass between when the indictment is issued and the first session,” Leposhtica explained. For 17 of the earmarked cases BIRN and Internews Kosova found data on, an average of 710 days have passed since the indictment was made. These cases have not been solved yet.

In more extreme cases such as the one involving high-profile individuals like Kosovo Energy Corporation, KEK, director Arben Gjukaj and former Skenderaj mayor Sami Lushtaku, over three years have passed since the indictment, but the trial is only at the beginning. In this particular case, seven individuals are accused of rigging a public tender worth around six million euros.

Kosovo Chief State Prosecutor Aleksander Lumezi agreed that there were no concrete results on final decisions for the earmarked cases.

“But additionally, we should have in mind that we have evaluated the targeted cases as the most difficult cases in the Republic of Kosovo,” Lumezi added.

He also said that the State Prosecutor is targeting a few more cases and that they would have concrete results by June.

Meanwhile, the head of the Supreme Court, Enver Peci, insisted that they could not guarantee the completion of the cases by June.

“This is a process, we cannot say that these cases will be completed and if they are not, there will be no liberalization. We cannot measure the completion of the cases by days and months, because the cases are complex,” Peci said.

Meanwhile the head of the Prishtina Basic Court, Aferdita Bytyci, claimed that the biggest challenge was the small number of judges.

“We have 14 judges and they’re in courtrooms every day. The number of courts is simply small in comparison to the number of cases,” Bytyqi said, adding that the situation is worsened by new cases that pile up every day.

“EULEX alone transferred 21 cases to [the Basic] Court,” she said.

“It is exactly EULEX that have complicated things. For example, there is a case in which they heard 16 witnesses, and then the case is handed over to us,” Peci said.

Another high-profile organized crime case—which is not one of the earmarked cases the track record on visa liberalization—involving former MP Azem Syla was recently transferred from EULEX to local judges. The EULEX prosecutor on the case said the move would be “the end of the case.”

Peci said that the Supreme Court will prioritize the remaining track record cases, and also promised to focus on all corruption cases, not only those earmarked for visa liberalization.

Leposhtica recommended that the KCJ and KPC increase communication and coordinate their files.

“Each judge that is working on a targeted case gets support from professional collaborators,” Leposhtica said, adding that prosecutors on these cases should also get extra help. Other recommendations in the report include the redistribution of cases to courts with lighter caseloads, and prioritized scheduling of sessions for corruption cases.