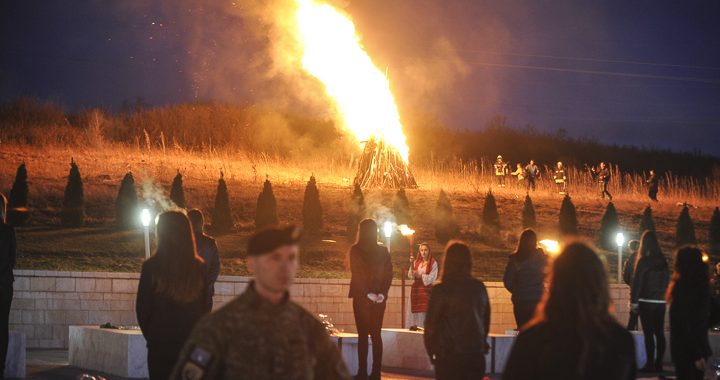 Kosovo marks 21st anniversary of the attack on Prekaz

With the ‘night of fires’ torch procession, Kosovo ends its three-day commemoration paying respect to KLA commander Adem Jashari and his family, killed 21 years ago on Thursday.

Soldiers in uniform and citizens in national costume will gather in the village of Prekaz to carry torches for the ‘Night of Fires’ on Thursday, marking the end of ‘The Epic of Kosovo,’ or ‘Epopeja e UCK-se,’ an event commemorating the three-day attack on Prekaz in Drenica, often referred to as the event that sparked the beginning of the Kosovo war.

Through the ‘Night of Fires,’ Kosovo commemorates the 21st anniversary of the death of Adem Jashari, commander of the Kosovo Liberation Army, KLA, and 58 members of his family, who lived in the village of Prekaz. The three-day commemoration, held from 5-7 March, includes a parade by members of the Kosovo Security Force, KSF, which takes place every year.

The commemoration began on Tuesday at the Adem Jashari military base of the KSF in Prishtina with a parade and speeches by top state officials.

“Today, we are marking the 21st anniversary of the glorious Epic for the KLA, but on the same day we remember the ethnic cleansing which saw 13,000 civilian victims, 400 massacres and 20,000 raped women,” President Thaci said to the crowd at the opening ceremony of the commemoration on Tuesday.

The 21st anniversary of Jashari’s death follows the recent  expansion of the KSF competences by the Kosovo Assembly in December last year, a decision that was met with numerous criticisms and disagreement from NATO and other EU institutions.

Tuesday’s ceremony was attended by President Hashim Thaci and Prime Minister Ramush Haradinaj, the Minister of Defense Rrustem Berisha, representatives from Jashari family and ministers and deputy ministers of the government cabinet.

In his speech, President Thaci once again pledged to strengthen relations with the US, which, according to him, have been under pressure in recent months as a result of the tax increase imposed on Serbian goods by Kosovo authorities.

“Kosovo will be a member of NATO and of international organizations, and will strengthen its collaboration with the USA,” Thaci said.

Meanwhile, Prime Minister Ramush Haradinaj said that the Assembly’s decision to expand KSF’s competences in December “glorified this force even more,” adding that: “The Kosovo army should not be used against the people of Kosovo in either the south or in the north, but it should serve all of the citizens of Kosovo.”

The brother of Adem Jashari, Rifat Jashari, also spoke at the parade, saying that he hopes the Kosovo army will be ready “to protect the country, just like the KLA did.”

On Wednesday, a session was held at Kosovo Assembly paying respects to the legacy of Jashari and his family, with speeches from Haradinaj, the Prime Minister of Kosovo and the Kadri Veseli, the speaker of the Assembly.

Tributes to Adem Jashari were held on Wednesday and are organized to take place on Thursday at both his family’s grave and at memorial complex in Prekaz, ending with the procession with torches on Thursday evening.